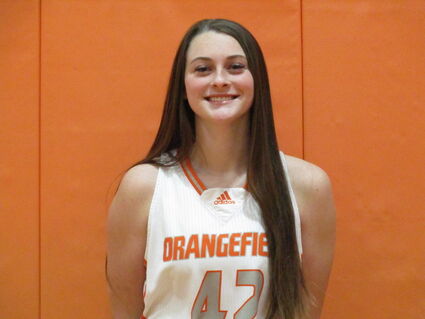 The annual Bill Tennison Tournament was held at the Orangefield Gymnasium on Tuesday and Wednesday before the start of the New Year. Six girls basketball teams from southeast Texas competed with each team playing four games during the tournament.

The Orangefield Lady Bobcats hosted the tournament and represented themselves very well. The Lady Bobcats split the four games they played.

The first game of the tournament on Tuesday, December 27, featured a county matchup of Orangefield facing the Vidor Lady Pirates. The Lady Bobcats had been district opponents with the Lady Pirates prior to this season when Orangefield was lowered in classification to compensate for enrollment numbers.

The game remained scoreless until 2:40 had elapsed and Harleigh Rawls of the Lady Bobcats nailed a three-pointer. When the Lady Pirates finally scored it began a nine-point run for them as they took a 9-3 lead.

Rawls hit her second long shot to start a streak for Orangefield as Greenlea Oldham and Brianna Moore followed with baskets. Moore's was also from three-point range to give Orangefield the lead again 11-9. Vidor tied it but Rawls connected on her third three of the first quarter to put the Lady Bobcats up 14-11 as the quarter ended.

Scoring was very sparse in the second quarter with the two teams totaling only 11 points between them. Madison Powell of the Lady Pirates scored five of their six points to cut the Orangefield lead to two points 19-17 as the first half concluded.

The third quarter proved to be the pivotal point of the game as Vidor came to life matching their point total of the first half during the eight-minute period. Oldham scored four points but that was two-thirds of the Lady Bobcats' output in the quarter as the Lady Pirates took a 34-25 advantage into the final period.

The possibility of a comeback began to loom as Rawls made three free throws and a field goal while Oldham added a bucket to trim the Vidor lead to four points. Free throws did decide the outcome in the end as Rawls and Moore both sank two free throws in the last minute but Laikyn Brodnax of the Lady Pirates made two huge shots from the charity stripe to give Vidor the win 40-38.

Rawls was the high scorer in the game with 20 points. Oldham notched 10 points with 6 rebounds and a blocked shot for the Lady Bobcats. Moore added 6 points to the Orangefield scoring.

The Lady Bobcats second game on Tuesday was against the northern neighbor of Vidor the Evadale Lady Rebels. This proved to be another tight contest between the two teams.

As they did against Vidor the Lady Bobcats dominated the early minutes of the game with Evadale. Greenlea Oldham converted a three-point play to start the scoring and Harleigh Rawls made it 5-0 with a basket.

The Lady Rebels showed a pension for shooting the long ball as they sank two in the first quarter. Oldham was a force to be reckoned with in the first quarter posting nine points and twice scoring on put backs of rebounds she grabbed to help Orangefield take a 13-8 lead after one quarter.

Three more threes dropped for the Lady Rebels in the second quarter. Sterling Richard came off the bench to score four points including a coast to coast dribbling exhibition that she finished with a drive to the basket and a layup.

Oldham added four more points and Brianna Moore made a three-point play of her own in the second period. The Lady Bobcats went to their locker room up 24-21 over the Lady Rebels.

Evadale rallied to take a 25-24 lead until Brooklyn Wagoner popped a pair of threes for the Lady Bobcats. Rawls made a steal that resulted in a bucket and sank two free throws to pad the Orangefield advantage.

Another sub for Orangefield Ava Dyer sank a late basket as the Lady Bobcats appeared to have secured the game with a strong third quarter. They outscored Evadale in the period 14-9 to take a 38-30 lead with eight minutes to play.

There was no quit in the Lady Rebels as they rallied scoring the first five points of the fourth quarter before Oldham made a bucket. Evadale continued to pressure the ball and tied the game 42-42 with time running down.

Richard made another clutch basket to regain the advantage for Orangefield. Oldham would finish the deal with a free throw and finally a base line drive for two points that insured the win 47-44 for the Lady Bobcats.

In the afternoon game Oldham was clearly the star of the game She hit the 20-point mark, grabbed 17 rebounds, made 2 steals, and had 1 blocked shot. Three Lady Bobcats Rawls, Richard, and Wagoner each contributed 6 points to the victory.

Beating Evadale in a close contest is a hurdle Coach Eric Girola of the Lady Bobcats is happy to see them make. "We've played a lot of close games this year, and we just haven't been able to close them out. I really hope we can take that win and build off of it because it has really been a struggle just a big hurdle of ours to take those close games and finish them out. The Lady Bobcats were really composed that last minute and a half to two minutes, did exactly what we needed them to do, and I just hope we can snowball that into some more positive wins," Girola responded.

Basketball action continued on Wednesday, December 28, in Orangefield. The Lady Bobcats squared off against the Port Arthur Memorial Lady Titans which is in Class 5A during their morning game.

Orangefield fell behind the Lady Titans 5-1 before the Lady Bobcats rallied to take the lead 6-5 on a three-pointer by Brianna Moore. Harleigh Rawls scored the last four points of the first quarter to give the Lady Bobcats a 10-7 advantage.

Ava Dyer and Moore scored the first four points to start the second quarter which increased the Orangefield lead to 14-7. Dyer added a later basket and junior varsity callup Rebecca Durbin made two late buckets to put the Lady Bobcats on top of Memorial 20-16 at half time.

The Lady Titans came out quick to start the third quarter scoring the first six points to take the lead. Two free throws by Rawls tied the game, but Memorial then went on a seven straight points streak going ahead 29-22. Orangefield closed the gap on a three-point play by Rawls and a basket by Kaylea Gravett going to the final period down by two points.

Memorial began the fourth quarter as it did the third tallying the first six points to take its largest lead of the game 35-27. Rawls hit a three-point shot and two more free throws to make it a two-point game in the last minute, but the Lady Titans added a free throw and played great in bounds defense preventing the Lady Bobcats from setting up any kind of last second buzzer beater to tie the game. Memorial won 43-40 over Orangefield. The Lady Titans were the only team to win all four of their games in the Bill Tennison Tournament also defeating Warren, Vidor, and Evadale.

The leader for the Lady Bobcats was Rawls with 16 points. Harleigh also grabbed 3 rebounds and had a steal.

Post Greenlea Oldham for Orangefield got into early foul trouble and saw limited playing time from her normal allotment scoring 7 points with 12 rebounds. Her replacements Dyer and Durbin both did their part with 4 points apiece.

The final game of the tournament was played on Wednesday afternoon. The host Lady Bobcats played the Cleveland Lady Indians.

Defense was the key in this game. Orangefield scored its fewest points of any game in the tournament yet won easily by fifteen points 36-21 over Cleveland.

Greenlea Oldham and Harleigh Rawls were the leaders on offense and were strong on defense. Oldham had a double-double with 14 points and 19 rebounds. Rawls scored 12 points, grabbed 5 rebounds, and handed out 3 assists. Kaylea Gravett tossed in 4 points for the second straight game with 7 rebounds and Sterling Richard added 4 points with her 4 rebounds. 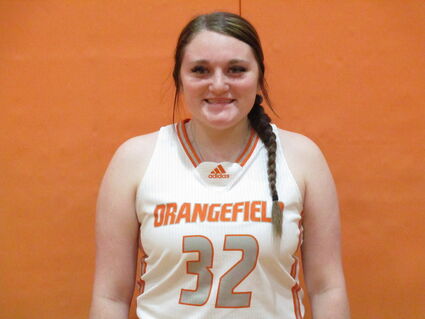 Coach Girola was very satisfied with the effort made by Orangefield in the win over Cleveland and was impressed with the defensive play of his Lady Bobcats. Girola elaborated, "Holding a team to 21 we should win those games. I was very pleased with the defense. Because we don't have a lot of offensive fire power we have to play good defense, we just have to and I like to see that. It was nice not to have a two or three point game for once."

The Orangefield Lady Bobcats coming off their strong play in the Bill Tennison Tournament resumed district action on Tuesday, January 3, against the Hardin Lady Hornets. "Winning a game is great and we need every one of them we can, but the district ones those are the ones that matter," Girola concluded. The Lady Bobcats were 1-2 in district before the game at Hardin and play against Warren on Friday, January 6, in their next home game.