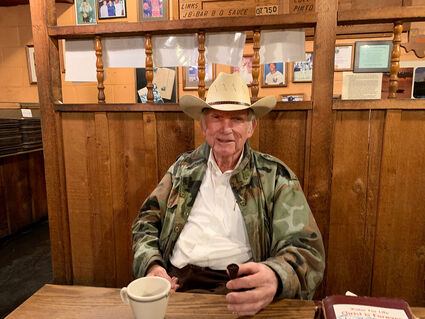 Local barbecue legend J.B. Arrington is closing shop and selling out. The last day to get the tinder smoked brisket with its tangy signature fat-free sauce will be Friday the 13th.

Not only is Arrington closing the restaurant, he's selling it with all the equipment, plus the landscaped 1.5 acres it sits on, along with the two-bedroom house next to it.

"Miss Mary and J.B. are too old and too tired," he is telling people through handwritten sign posted on the front door. Between the two of them, they've lived 198 years, according to the sign. J.B. turns 98 this year. But Mary is only 92. They've been married for 74 years. His math may be a bit like his story tellling, which is as legendary as his barbecue.

"I can't believe this is closing. I just can't believe it," said longtime customer Wayne Outlaw, who walked in Tuesday carrying big beef roasts to be customed smoked.

Mary was at the store Tuesday afternoon. "It's time to quit," she said. Not only are she and J.B. getting tired, she said, but "it's so hard to get help."

The Covid pandemic closed the restaurant for a while and then the lack of supplies and workers did not help the business. Relatives, including nieces, grandsons, and granddaughters have been helping out to keep it going.

On Tuesday, relative Cressa Hebert and longtime friend Tanner Lunsford, who has been cooking, were working the counter. Tanner looks younger than some of J.B.'s boots.

J.B. opened the restaurant along Old Highway 90 at Interstate 10 on June 13th, 1972. He said he figured he'd close it on the 13th, which will be 50 years and six months after the opening.

According to stories J.B. has told, he ended up in the restaurant business after a "horse wreck." The Orange County native had gone to college after serving in World War II and became the agriculture teacher at the old Stark High School.

One day while working at school, he broke his leg as he was riding a horse at the school's ag farm. He said the school's principal came to his hospital room and told him if he didn't get back to work in a week, he wouldn't be paid. 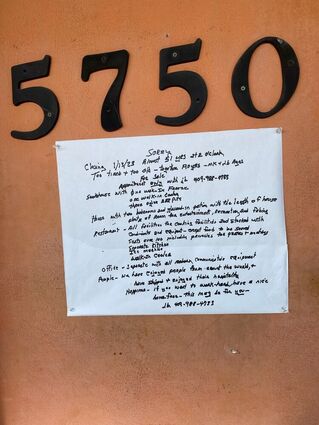 J.B. Arrington placed a handwritten note on the front door of JB's Barbecue telling the world he is closing and selling the restaurant, equipment and adjacent house.

J.B. and Mary at the time had three children and another was on the way. He decided to get out of the school and open a restaurant. He had lots of experience cooking and smoking barbecue for large groups. The rest is local history.

JB had learned all about butchering and meat while studying and teaching. He knew that "prime" and "choice" beef made the best barbecue and used those kinds of meats. He created a fat-free, cholesterol free barbecue sauce that drew so many fans he bottled it and shipped it across the world.

The restaurant was always a family affair. In 1978, son-in-law Jay Matthews came aboard and became manager. He has since retired.

That was the year J.B. bought the downtown landmark Capistrano on Green Avenue. He named it JB's Capistrano and sold his barbecue there along with traditional Southern diner food. He sold the Capistrano in 1987.

Now, the jewel of the restaurants will also be sold. But J.B. Arrington and his barbecue will live on in local history.