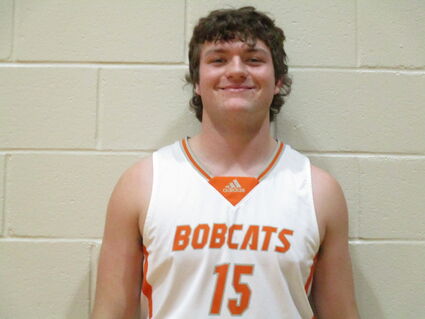 On Tuesday, January 3, the Bobcats traveled to Hardin and played the Hornets. The first quarter summed up the game as Orangefield jumped to an 18-4 lead and went on to a decisive 77-38 victory.

Pete Ragusa of the Bobcats was the high scorer with 28 points. Jaden Scales and Zane Wrinkle scored in double figures with 14 and 13 points respectfully. Scales had eight assists for the Bobcats.

Post Morgan Sampson playing with a brace on his left knee led Orangefield in rebounds with six. Sampson was not expected to play any more basketball after the Orangefield Tournament. Coach Jake McDonald responded, "Morgan's had some knee trouble, but got a good prognosis over the holidays, and he's definitely a big asset as a two time all-district player in basketball, so getting him back is a pretty big deal for us."

The Bobcats went to 18-5 on the season and 3-0 in district when they defeated the Warren Warriors at the Orangefield Gymnasium on Friday, January 6. Orangefield again took a big lead early and won 76-48 over Warren.

After scoring the first four points of the game the Bobcats played about even with the Warriors who pulled to within two points 12-10. Orangefield got two late baskets from Pete Ragusa and one from Brayden Parker the same two Bobcats that opened the scoring to lead 18-10 after the first quarter.

Freshman Jaden Scales popped a three-pointer to begin the second period that gave the Bobcats a double digit advantage. Orangefield scored 23 points during the quarter and enjoyed a 41-25 lead at the half.

The third quarter was the only one of the four in the game that was close. Kane Smith went coast to coast to score a basket for the Bobcats and then made a three-point play later to make the score 51-32. Koen Maddox scored on a sweet pass from Parker to finish the period and give Orangefield an eighteen point advantage going to the fourth quarter.

In the final period Orangefield's Zane Wrinkle made a rare four-point play when he was fouled while sinking a three-point basket and then nailed the free throw. The Bobcats matched their 23 points scored in the second quarter in the fourth quarter as well to conclude the twenty-eight point triumph.

Eight Bobcats scored at least four points showing great balance in the scorebook. "That's really kind of what we strive for, it's one of our goals every night to have at least three guys in double figures and tonight we had some other guys score which as we move forward in the year we're definitely going to need other guys to step up," McDonald expressed.

Ragusa led the Bobcats with 15 points. Three other Bobcats were in double figures followed by Scales who had 13, Parker scored 12, and Wrinkle tallied 10 points. Morgan Sampson registered 6 points and pulled down 8 rebounds to lead Orangefield in that statistic.