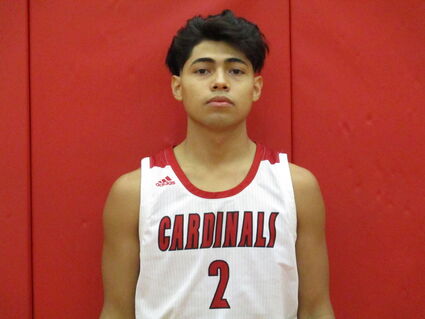 District action resumed Tuesday, January 3, for the Bridge City Cardinals and began for the Little Cypress Mauriceville Bears at the Dr. Pauline Colburn Hargrove Gymnasium. The Cardinals won a thrilling game 63-62 over the Bears.

Bridge City participated in the LCM/IP Classic at Little Cypress Mauriceville the week before. Cardinal Coach Randall Robertson wanted his team to become more familiar with the gym for Tuesday's game. "We like playing in that tournament for a reason because we get a couple extra games in their gym right before we play them typically. The Bears are a great team and well coached, but we knew we had a shot coming in," Robertson explained.

The game started like it was going to be the Bears' day at their home gym. LCM jumped to a 6-0 lead on threes by Ben Elliott and Alantheon Winn. The Cardinals scored ten of the next twelve points and took their first lead 10-8 on a basket by Walker Britten.

Ty Blackmon hit back-to-back threes for the Bears to regain the advantage for Little Cypress Mauriceville. Blackmon's second trey was at the buzzer to make the score 14-10 after one period.

The Cardinals kept the pressure on LCM at the start of the second quarter. Jerris Brown made a beautiful put back and Fernando Rodriguez drained a three-point field goal to help Bridge City go up by one point 15-14 at the 5:19 mark of the second.

The score seesawed back and forth until Rodriguez hit his second three pointer of the quarter to put the Cardinals on top 22-19. Bridge City would never trail again in the game.

Rodriguez added a field goal and two free throws as the Bridge City advantage was stretched to six points 29-23. Elliott made a basket and a free throw for the Bears to make the score 29-26 at the half.

As the second half started Britten was fouled when shooting a three pointer and made all three free throws for the Cardinals. Brown hit a jump shot followed by tipping a rebound back into the hoop to spark a 14-4 run late in the third quarter to give Bridge City a 45-34 lead. Noah Fuller hit a three as the buzzer sounded to pull the Bears within eight points going to the last quarter.

Elliott narrowed the deficit to one point before Jagger Carlin of the Cardinals sank two free throws in two separate trips to the free throw line to put Bridge City up 63-60 with less than 30 seconds to play.

LCM pulled back to one point when Elliott made a ten-footer from the lane. Two missed free throws by Bridge City kept the Bears chances of the win in regulation alive, and Elliott put up a shot at the buzzer that stayed out of the hoop giving the Cardinals the one point win.

Britten was the leading scorer for Bridge City with 19 points and was perfect from the free throw line sinking all ten he took. Rodriguez made a strong contribution tallying 17 points. Brown scored 8 points for the Cardinals, and Aiden Gutierrez produced all 7 of his points in the fourth quarter.

The game may have been decided at the free throw line for Bridge City. The Cardinals made 21 of 31 free throws while the Bears were successful on 12 out of 23 shots from the charity stripe.

Coach Robertson was thrilled with the victory for Bridge City. "Our guys played four full quarters and found a way to pull it out something we hadn't done in the past, I'm proud of them," Robertson praised.

The Bridge City Cardinals (1-1) had a bye on Friday, January 6, and played Vidor on Tuesday, January 10. The Cardinals play in Lumberton on Friday, January 13. Coach Robertson is optimistic for Bridge City in its upcoming games. Robertson predicted, “I think we opened with the two best teams in the district with Silsbee and at LCM’s place so we could have easily started with two losses. I told the guys with this win we could carry momentum into the rest of district to give us a great first half of district and be in a position to make the playoffs.”

The Little Cypress Mauriceville Bears (1-1) played at Vidor on Friday, January 6, and defeated the Pirates 61-44. Ben Elliott led the Bears with 30 points and 14 rebounds. Alantheon Winn and Da’Marion Morris both scored 9 points against the Pirates.

The Bears played at home on Tuesday, January 10, against the Lumberton Raiders. LCM will play the Jasper Bulldogs in Jasper on Friday, January 13.