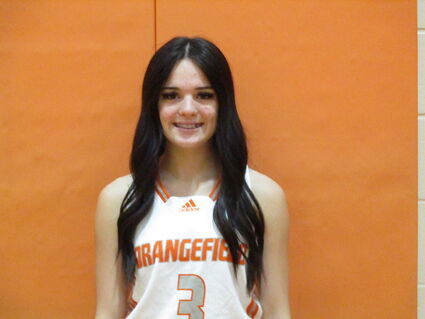 The Orangefield Lady Bobcats played two games since the Christmas holiday. The Lady Bobcats split the two games played but lost the services of one of their top players.

Orangefield's Harleigh Rawls has been a leading scorer, a good rebounder, and a top playmaker for the Lady Bobcats during the season. Rawls has an arm injury she suffered in the Bill Tennison Tournament the week between Christmas and the New Year which had her out of uniform on the bench for both of the last two games.

Coach Eric Girola updated the status of Harleigh for games this week. "We'll see if she's able to get back to play this coming week but I want to make sure she gets as much rest as possible," Girola replied.

On Tuesday, January 3, Orangefield played the Hardin Lady Hornets. The Lady Bobcats got a key district win 43-38 in Hardin.

Kaylea Gravett had a marvelous game for the Lady Bobcats. Gravett was the leading scorer for Orangefield with 15 points. Kaylea made three steals, handed out three assists, and blocked a shot.

The following Friday, January 6, the Lady Bobcats hosted Warren. The game started like it would be another one in the win column for Orangefield.

Three baskets by Gravett and a three-point basket by Wagoner gave the Lady Bobcats a 9-1 lead. Wagoner added two free throws and Orangefield enjoyed an 11-1 advantage after one quarter.

Warren staged a good comeback in the second quarter limiting Orangefield to just two free throws made. The score at the half was 13-11 in favor of the Lady Bobcats.

The third quarter was another strong one for Orangefield as Gravett dropped a three as did Wagoner to make the score 19-13 for the Lady Bobcats. Playing with three fouls Oldham made her presence felt with her first bucket of the game late in the period.

Orangefield took a 23-16 edge into the final quarter. Warren cut the lead to two points before Oldham scored her last basket before fouling out of the game. The Oldham field goal would be the only points in the fourth quarter for the Lady Bobcats until the final second of the contest.

The Lady Warriors took their first lead of the game on a free throw with just 30 seconds left to play. Warren added a field goal to go up 28-25. Orangefield's Brianna Moore was fouled in the last second and made one of two free throws to make the final score 28-26 in favor of Warren.

The young Lady Bobcats were handicapped without the ball handling skills of Rawls to be able to even inbound the ball. The absence of Oldham's senior leadership on the court because of her foul troubles keeping her on the bench was another reason for the Orangefield collapse in the final quarter.

Gravett and Wagoner both finished the game with 9 points. Oldham scored four points and four Lady Bobcats each made one free throw for their only points in the game.