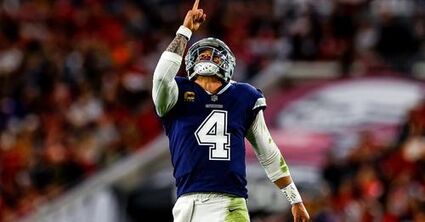 Whenever the National Football League owners get together to make some changes, one an be rest assured it is merely a means for them to line their pockets even more.

But I have to admit, the expansion of the Wild Card Playoffs from 12 teams to 14 teams probably dumped more currency into their pockets, but it also resulted in football games that you were afraid you'd miss something if you went in the kitchen to crack a beer during a time out.

It took a bunch of compromising for the owners to agree on just two more teams in the 2023 playoffs, because many wanted that number up to 16 or even 18, like it's done in the NBA.

Proponents of the 14-team format believed that a division loaded with quality teams could have one or even two that wouldn't make the wild card playoffs.

And that's exactly what would have happened in the NFC East where division champion Philadelphia, the Dallas Cowboys and New York Giants all had dazzling won-lost records. Even last place Washington was in contention for a wild card spot until the final week of the regular season.

The games last weekend were exciting to watch on TV and proved that even huge underdogs had a chance to win in the fourth quarter of most games. Strangely, every wild card game was a rematch from the regular season. So, everyone was familiar with their opponent.

The Jacksonville Jaguars, who needed an overtime field goal to win their division from the Tennessee Titans, looked like they were overmatched when the LA Chargers jumped out to a 27-0 halftime lead.

But Head Coach Doug Pederson kept injecting encouraging words to his team during the halftime and the Jags came out looking like a new team in the second half and gave young quarterback Trevor Lawrence a script of plays he thought would work.

As Jacksonville began reducing the deficit, it inspired the defense to step up their game and before long the Jags trailed by only one point, 30-29 after scoring a touchdown with eight seconds left in the game.

It looked like overtime for everyone but Pederson, who called for a two-point conversion that was good and Jacksonville recorded one of the greatest comebacks in NFL playoff history, winning 31-30 and live to play another day-even though it's against No. 1 seed Kansas City.

The same thing happened to last-seeded Miami as the Dolphins found themselves on the wrong end of a 17-0 score to Buffalo in the second period. But they whittled the lead, trailed only 20-17 at the half and then took the lead 24-20 early in the third stanza.

Buffalo quarterback Josh Allen, who had two interceptions and three fumbles (lost only one) came to life and threw for three touchdowns and led the Bills to a nail-biting 34-31 win.

Cincinnati had a relatively easy time against the Baltimore Ravens a week ago in the regular-season finale, but it was a different story Sunday when it took a 98-yard fumble return by Sam Hubbard to spell the difference in the Bengals' 24-17 win. The Ravens failed to connect on a Hail Mary pass in the end zone as time expired.

In another repeat meeting, the three-point underdog New York Giants scored on five of their seven possessions to eliminate the third-seeded Minnesota Vikings 31-24 behind the running of Saquon Barkley and the passing and running of quarterback Daniel Jones. Now the Giants must contend with top-seeded Philadelphia at 7:15 p.m. Saturday.

And last, but not least, our Dallas Cowboys broke a pair of jinxes that have been hounding the franchise for several decades Monday night when they traveled to Tampa Bay and whipped the Buccaneers and quarterback Tom Brady 31-14 to conclude the six Wild Card Playoff games of last weekend.

Dallas had not won a playoff game on the road since Jan. 17, 1995 when they beat the 49ers in San Francisco. They also registered their first win over a Tom Brady-quarterbacked team on their eighth try.

The Cowboys beat the Bucs in every phase of the game after being held to a single field goal in a 19-3 Tampa Bay upset victory in the season opener.

Quarterback Dak Prescott, who was virtually shut down before suffering a broken thumb in the first meeting, was nearly unstoppable Monday night, connecting on 23 of 33 passes for 305 yards and four touchdowns-one being a quarterback keeper-and zero interceptions.

Tight end Dalton Schultz hauled in two touchdown passes and wide receiver Michael Gallup caught another. The Cowboy defense had one of its finest games.

Dallas led 18-0 at halftime which was only the second time in his 23-year career that Brady had been shut out in the first half of a playoff game. The other time was in his first playoff in 2001.

The Cowboys will meet the red-hot 49ers in San Francisco 5:30 p.m. Sunday and try to snap the 49ers' 11-game winning streak.

KWICKIES...Rockwell Heath High School head football coach John Harrell was put on administrative leave Friday for allegedly working out players so vigorously without a break in the strenuous workout that several were hospitalized. A third party currently is investigating the incident.

Chicago Bears' quarterback Justin Fields' three touchdown runs of more than 50 yards are the most by an NFL quarterback since 1925. And he did it all in one month against the Detroit Lions, Green Bay Packers and Miami Dolphins.

The last time the Pittsburgh Steelers and New England Patriots both missed the NFL playoffs was in 2000. The last time the Steelers, Patriots, Indianapolis Colts and Denver Broncos missed the postseason was in 1990. And the last time Buffalo and the Miami Dolphins met in the playoffs the quarterbacks were Dan Marino and Doug Flutie.

Stephen A. Smith, host of ESPN's "First Take" commented Monday about Jacksonville's come-from-behind 31-30 win over the LA Chargers. "If the Chargers don't fire head coach Brandon Staley for blowing a 27-0 halftime lead before this show ends, I'll be totally surprised."

Kevin Barbay who served as the offensive coordinator for Appalachian State last season was hired for that same position at Mississippi State last week. Look for the Nederland native to slow down coach Mike Leach's "Air Raid Offense" and focus more on ball control.

JUST BETWEEN US...The Houston Astros avoided arbitration with six of their players eligible for the process with lefty Framber Valdez happy with his $3.8 million raise. The new pact more than doubles what the All-Star earned last season. Players with no less than three and no more than six years of major league service time are eligible for arbitration, Five of the Astros eight arbitration-eligible players went through the process for the first time. Starter Jose Urquidy agreed to a $3.025 million deal in his first year of eligibility and relievers Ryne Stanek, Blake Taylor and Phil Maton each received raises along with utilityman Mauricio Dubon.