OJH 7th and 8th grade A-teams traveled to Port Neches for a tournament. 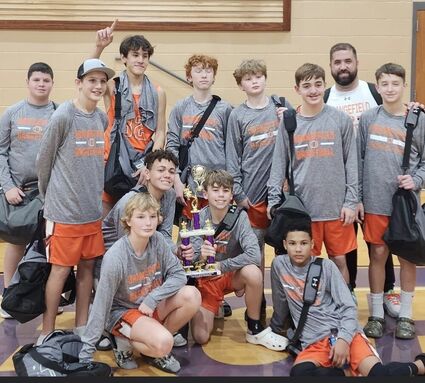 The 7th graders played and won three games, keeping their undefeated streak alive. First, they took on the CO Wilson Bullpups, defeating them 33-27. Every Bobcat scored in this game, but the leading scorers were John Royer with nine points, while Jaxon Agerton and Kolte Morgan followed with four each. Next, the 7th grade took on Port Neches and handed them an L, winning 31-23. Royer led the way in scoring again with nine points, followed by Kyran Morrow with six, and Logan Anderson with four. The Bobcats led this one from beginning to end with good defense and unselfish play. Finally,  the Cats took on the Raiders from Lumberton in the championship game and came away with the win, 36-29. Royer led the way yet again with 15, followed by Jaxon Agerton with eight. Congratulations to these young men on getting first place in the tournament!

The 8th grade group struggled to score in both games and suffered their first losses of the season. First, they took on CO Wilson, losing 22-26. It was back and forth the whole game, but the Cats' shots just would not fall. Offensively, they were led by Rylan Agerton with eight and Carson Gonzales with 10. Next, the group took on Port Neches and lost 48-29. This game kept the Cats flustered as they tried to stop the point guard from PNG. Offensively, this game was led by Owen Sims who had a double-double with 10 points and 10 boards. Rylan Agerton, Carson Gonzales, and the rest of the squad played smothering defense, but the Cats ran out of gas as the Warriors kept sinking shots.