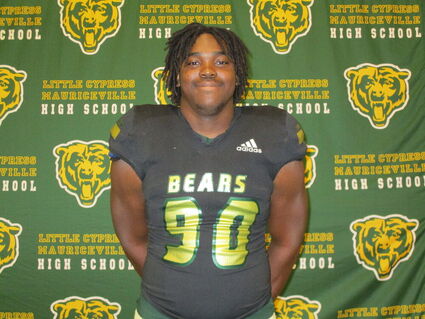 Washington will be graduating from Little Cypress Mauriceville this spring and will play college football with Texas Tech University beginning in the fall. The official signing between Washington and the university was held previously during the holiday school break, and LCM wanted to hold another opportunity to allow students and the public to congratulate Amier on his moving on to play college football.

Eric Peevey the head football coach for the Little Cypress Mauriceville Bears introduced Washington during the ceremony. Peevey said Amier as a sophomore was coincidently the first Bear football player he met when the coach took the position at LCM.

This past football season was a culmination of an outstanding high school career for Washington. In his senior year Amier was the District Defensive Most Valuable Player. He was selected as a finalist for the Willie Ray Smith Award after his junior year and could repeat that again this year.

Peevey expressed his admiration for Washington and his devotion to the Little Cypress Mauriceville football program. "Any positives that we've had in our football program come from guys like Amier. I'm just very honored to be able to coach a young man like this, and one that has really set a cornerstone in our program of this is how things need to be," Peevey responded. 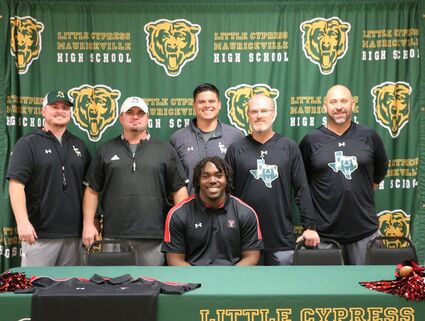 Obviously, Washington is a great football player. Amier also excels in track and field. Coach Peevey mentioned that Washington was at the school every day during the winter break practicing throwing the shot and the disc.

Amier's goal is to go to the state finals in the shot put and the discus. Peevey added, "Here he is a senior that's already signed to play at Texas Tech University, and it is just amazing that he still has goals for his high school and for his teammates. Amier is always wanting to do great for his teammates."

In his own words a change in attitude and working harder is what got Washington in the position to receive a scholarship to play football at a top school like Texas Tech. "I never thought I would get here. I used to be a really lazy kid and didn't do anything to help myself. Then I saw football as a way out and wanted to keep working on it to try to get better. My sophomore year I did terrible then my junior year is when I really broke out and scouts started noticing me," Amier reminded.