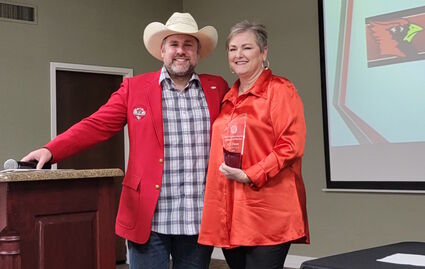 Cil Dixon(R) was presented the 2022 Citizen of the Year Award by Scot C. Shaffer(L), immediate past president of the Bridge City Chamber of Commerce at their 62nd annual banquet Monday night.

Cil Dixon was named Citizen of the Year for her years as a CASA volunteer advocate and current board member. Her husband, Sherby, and three of her four children, along with other family members were present to witness the honor.

"The children that we're serving don't have what we have," said Dixon. "I have a huge family. I have people that love me, support me. My children support me. My husband supports me."

She spent 10 years working cases and saw the direct impact being an advocate has on these children's lives and what their needs are.

"I'm gonna recruit tonight if you wanna come talk to me after (the banquet)," she said.

Always humble, Dixon denied being worthy of the honor. "Thank you for this blessing with this award, because I don't deserve it, but thank you," she said.

Terri Gauthier accepted the Business of the Year award as the owner of Total impressions. As Kirk Ellender, emcee for the night, was reading off a list of Gauthier's accomplishments, she began blushing at her seat.

"I'm color blind," said Ellender. "Even I can see that you're turning red." That evoked a laugh from the audience.

Total Impressions began in 1988 as the first full service salon in Bridge City in a converted house on Texas Avenue with five technicians, three tanning beds and a line of exclusive hair products and a small line of clothing. In 1997 they began constructing Grace Plaza and in 2020 they started the Cryotherapy Wellness Center within Total Impressions.

Gauthier said they have special pricing for first time treatments for anybody that wants to try the Cryotherapy.

"We can introduce you to the benefits of it. It's really an amazing treatment that's great for your body, for your skin, it's just a really wonderful treatment," she said.

Gauthier said she could not have survived the last 25 years in business without the support of the community. It is now a three-generation business as her daughter Victoria has worked with her and now her granddaughter has started working there.

"I just want to thank the chamber for nominating us this year and I'm very honored and blessed to receive this award," she said.

Candace Mulhollan was named Ambassador of the Year. She declined to speak, but was called back up later to present a "thank you" bouquet flowers to chamber director Mandy Lyda who has been on the job a little over a year. 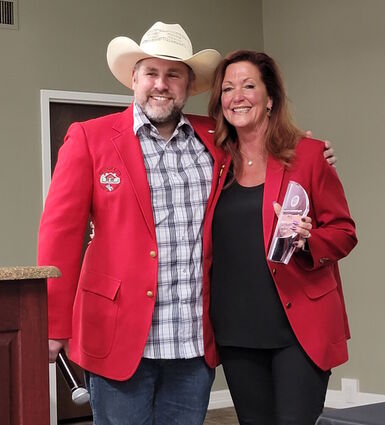 "She has been a blessing. If you have come to the chamber, if you have had to bring your business information, she is wonderful," said Mulhollan about Lyda. "She's on top of everything. She's here to help you and the community spread the word about your business."

Wanda McGraw was installed as the new president of the Bridge City Chamber of Commerce. The gavel was passed by immediate past president Scot C. Shaffer.

Other tidbits from the banquet include:

Carissa Slaughter was the opening entertainment during the cocktail social, plus she sang the National Anthem.