Something new is brewing in BC 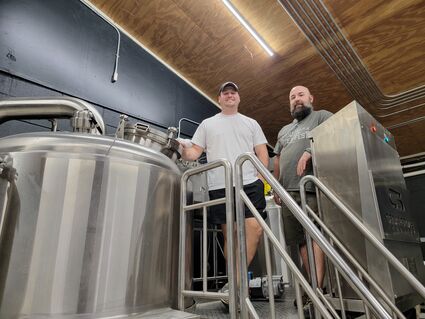 Soon, residents of Bridge City will be able to stop in after work for a glass of fresh brewed beer on the way home. After almost three years of planning, the first craft brewery will be opening its doors in February on Ferry Drive.

Delatte chose Bridge City because it is a residential community. The Ferry Drive location gets lots of traffic from people leaving work from the plants across the Neches, that live in the northern part of Orange County. Plus, it is less than a block from Texas Avenue, the main thoroughfare in Bridge City.

"There is touch up paint, get the tables set up, finish our bar top, get all our point of sales equipment set up and the draft system," said Delatte.

They were scheduled to get their equipment approved the day after this interview and should be brewing by now. They are set up with 30 taps. Two will be reserved for cider, they rest will be filled with their own brews.

"This is a young craft beer market. Some of the other breweries here definitely introduce people to craft, but it's not a huge thing yet," said Delatte.

"I've also been involved in a homebrew club in the Orange area...since 2006," said Mungai. "That's my connection to this area."

Mungai said he believes the Golden Triangle Home Brew Club has been together since the 90s. That was the closest group located near him when he lived in Lake Charles, years ago.

"We started one (in Lake Charles), but there was already a strong one here with a lot of experienced people that have been brewing for years and years," said Mungai. "That's part of the way I learned the craft, getting together with these old timers and learning what to do and also what not to do to make great beer."

"I've been brewing as a home brewer since about 2006 and professionally since about 2015," said Mungai. "I've trained in Goliad, Texas at a brewery that's no longer open. I stayed down there for a long time, kind of mentoring the brewing industry."

Mungai said the art of brewing works a lot like some of the trades, through a type of apprenticeships.

He has spent time at a number of local breweries learning a specific piece of equipment or collaborating with other brewers.

"There's a million different ways to make beer and get to the final process," said Mungai. "It's really kind of neat to see and learn. Sometimes you'll pick up a trick that's faster, cheaper, better... it's all hands-on knowledge."

"I'm self-taught a lot of time, on the Internet," said Mungai. "I joined the Master Brewers Association of America many years ago."

He said there is a ton of resources out there including books and conferences where you can learn about brewing.

"There's a lot of science behind it but then there's also an art to creating recipes," said Mungai.

A major part of that art and science has to do with the water. They tested the Bridge City water and have a commercial filtration system.

"We can mimic different water sources around the world with our setup so, for making a German pilsner we're gonna use German style ingredients," said Delatte. "We're gonna mimic the water that they use to make these beers."

They can strip water down to pure H2O and then add back different minerals like calcium and magnesium that are important to brewing and the flavor process of the final product.

The same goes for barley and hops. They will be importing ingredients from different parts of the world to recreate beers of those regions.

They intend to have a beer for everybody.

"We're obviously gonna have some great hoppy beers and all the different types of IPAs (India Pale Ale)," said Mungai. "A fruited sour will be one of our first beers we're making."

He said they would get into some barrel aging beers and fancier brews that take more time, once they have a suitable lineup to start. The first couple of beers will be ones with a shorter brewing time of a week to 10 days and are good with pizza.

"The other big component here is the high-quality pizzas that we're going to be cranking out," said Delatte. They will have appetizers such at pretzels with beer cheese and cheese sticks and other general bar/pub food, but Delatte said, "Our main dish is gonna be pizzas."

"Our sauce is made in house. We use the best and freshest grated mozzarella."

Delatte said they went to about 20 different pizza places and met with owners and chefs, learning how they made their dough and their sauces.

"There's specific tomato that they use that is not used down here," said Delatte. "It's an Italian tomato and the sauce is made fresh. We'll have to have it shipped in."

"We are the only place in all of Southeast Texas that has an authentic brick oven that was handmade in Italy," said Delatte. The pizza oven is a wood/coal fire oven. "It took almost a year to make and have shipped."

"Another interesting fact, our bar top is an original 302-year-old ash wood tree," said Delatte. It came from Canada originally, with paperwork. Delatte said they will likely post the paperwork somewhere in the bar so people can read about it.

"It's one of the longest bars in Southeast Texas," said Delatte. "it's over 71 foot."

Hop Avenue Brewing will be a family friendly place that happens to make and serve beer. There will be games such as shuffleboard, Golden Tee and other kid friendly activities.

It will have an outdoor beer garden for live music when the weather is nice and TVs to watch sporting events.

"We want people to come in, not just once a year, once a quarter, we're hoping they come in once a week or once every other week try the new pizza, try the new beers, have a good time," said Delatte.

They are still hiring staff ages 16 and up. You can apply on their website: hopavenuebrewing.com. Under the menu, click "join our team."

You will also be able to place orders online once they are open. 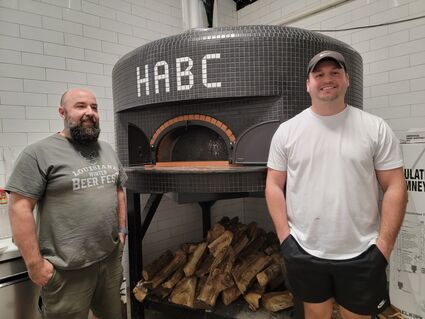 Bill Mungai (L) and Donny Delatte (R) will offer authentic New York and New Haven style pizza packed in their wood-fired oven that was made in Italy at Hop Avenue Brewing when it opens next month in Bridge City.

Hop Avenue Brewing is located at 75 Ferry Dr., next door to CVS.

Delatte and Mungai are excited to bring their style of craft brewing to Bridge City.

Mungai said, "The best part of all that hard work and everything is at the end of the day there's beer and pizza."