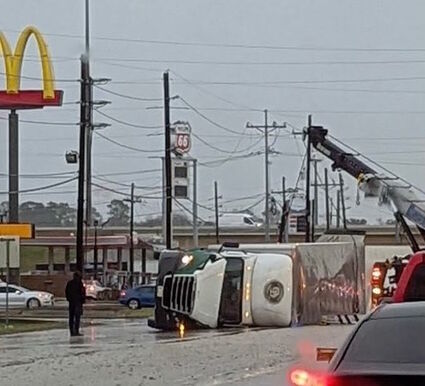 Highway 62 and I 10 area hit hard during tornado

A tornado went through Orange County and touched down in three areas, with Orangefield having the most damage, Orange County Emergency Management Director Joel Ardoin said Tuesday night.

He had reports of two injuries. In one, a woman was taken by ambulance to an area hospital, though he did not know the extent of her injuries. In another incident, an off-duty law officer inside his house was hit in the head by a tree limb coming through the roof. He had to have stitches.

The Orangefield school district announced schools will be closed Wednesday as officials assess damage to buildings. Photographs on social media show roof damage at an athletic training building and damage to fields and fences.

The Bobcat Trails subdivision near the school was hit with a number of houses having serious damage. In addition, the Regal Point subdivision on FM 1442 outside of Bridge City had houses with heavy damage.

Damages were also reported around the area of Highway 62 and Interstate 10. An 18-wheel truck rig overturned by the Pilot truck stop in the storm. Damage was reported at businesses along Highway 62 including the LaQuinta Inn, Sonic, and McDonald's.

Ardoin said the National Weather Service in Lake Charles had not confirmed the tornado, however tornado warnings were issued throughout Orange County a little after 4 p.m. Tornado warnings come when a funnel cloud has been spotted. Some people posted on social media that they had seen a tornado.

The weather service will send research crews out Wednesday to assess damage and track the path of the tornado.

Even without a tornado, the line of storms caused widespread damage with sustained winds up ranging from 20 to 25 mph and gusts of 30 to 35 mph, according to gauges at the Orange County Airport on Highway 87 South. Some of the straight-line winds in other areas may have been stronger.

Trees and limbs were reported down across the county, particularly in the Little Cypress area and around Allie Payne Road. A social media post showed structural damage at the Fox Run Apartments on Allie Payne Road.

Ardoin said his department will have a drone out Wednesday in the daylight to get an aerial view of where the damage is and to help determine the path of the tornado.

Entergy reported more than 18,000 Orange County customers were without electricity Tuesday evening. Much of the city of Orange was without power, along with other large areas of the county, including Orangefield. Estimates for restoration of electricity was for six to seven hours after the outages about 4:30 p.m. However, Entergy Texas was working with lost power lines throughout its service area, including an estimated 24,000 total for Orange, Jefferson, and Hardin counties.

Many people were getting notices that electricity may not be restored until late Wednesday night.

The severe storm was forecast and school districts throughout the county had postponed sports events for Tuesday. The districts also had early releases to let students get home before the severe weather hit.

The Orange County Courthouse closed offices at 2 p.m. so employees could get home safely. Commissioners Court, though, had a short meeting before the storm came. County Emergency Management Director Joel Ardoin was monitoring the weather during the meeting.

The Orange City Council and the city's Economic Development Corporation Board of Directors had scheduled regular meetings Tuesday evening, but canceled them earlier in the day because of the weather forecast.