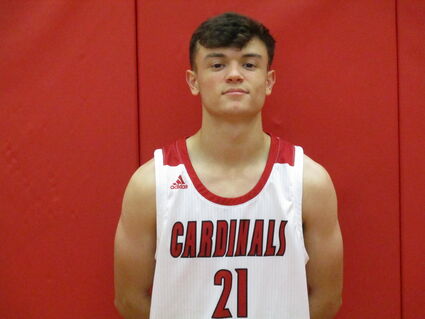 The Bridge City Cardinals were looking to secure their position in second place for the first half of district when they played at West Orange Stark on Friday night, January 20. A victory over the winless in district Mustangs would move the Cardinals into a tie for second place with the Lumberton Raiders.

The contest was anything but a walk-over for the Cardinals. The Mustangs led for the most part until late in the third quarter. Bridge City rallied and hung on in the fourth quarter for a dramatic 59-56 triumph.

The Mustangs got the first two baskets of the game from Darren Anderson and Jamikael Davis to take the initial lead, and Davis added a second bucket to put them up 6-3. Lincoln Breaux and Jerris Brown scored for the Cardinals to give Bridge City a brief 7-6 advantage with 2:30 left in the opening quarter.

The defense was tenacious for West Orange Stark limiting the Cardinals to only a single free throw for the remainder of the period. Jamar O'Neal regained the lead for WOS 8-7 when the Mustangs started raining threes with one by Chadrick Lee and two by Geramicah Davis that made the score 17-8 after one period.

The second quarter began with Bridge City scoring the first nine points in about three minutes to grab the lead 19-17 on Walker Britten's two free throws. The Mustangs and the Cardinals exchanged the lead four more times as Andrew Cooper of WOS and Britten alternated baskets.

The Mustangs went ahead on a basket by Anderson with one minute before half time. Cooper made two late free throws to give West Orange Stark a three point advantage 27-24 at the half.

A three point play by Bridge City's Fernando Rodriguez tied the game as the second half started. O'Neal scored for the Mustangs to give them back the lead which was eventually stretched to five points 38-33 on a free throw by Tahj Amerson.

A trio of treys turned the momentum for the visitors. Britten hit the first followed by two from Aiden Gutierrez to put the Cardinals on top 42-38 with less than two minutes left in the third.

Geramicah Davis narrowed the gap for the Mustangs with the last basket of the quarter. Bridge City took a two point lead to the wild final quarter.

Twenty seconds into the fourth Jamikael Davis tied the game for the Mustangs. The Cardinals answered by tallying the next six points to go up 48-42 a lead that held to the final two minutes.

Cooper knotted the score at 51-51, and Anderson had the home crowd at West Orange Stark going crazy when he made a short jumper to give the Mustangs a 53-51 lead with just 1:14 left in regulation.

An opportunity to even the score for West Orange Stark just missed when Jamikael Davis had the second of his two free throws stay out of the hole with 21 seconds on the clock. Five seconds later Rodriguez sank his two free throws and the Cardinals had a three point 57-54 lead with sixteen seconds left.

West Orange Stark appeared to be playing for a last second shot to tie the game when Bridge City's Gutierrez was called for a foul with less than seven and a half seconds to go. Cooper made both free throws to cut the lead back to one point.

In preparing for the in bound pass one of the Mustangs fouled Gutierrez sending him to the line where he made both shots to up the Cardinal's lead back to three points. The game returned to the same situation as it was at the sixteen second mark just nine fewer seconds for West Orange Stark to execute a long shot to try to tie the game.

The Mustangs in bounded the ball but the clock did not start immediately. The clock was supposedly reset to about seven and a half seconds, and the Mustangs inbounded again. The problem was the clock was reset to seven minutes and twenty-seven seconds. After approximately eight seconds the referees blew their whistles signifying the end of the game as they had manually counted off the remaining seconds as they transpired.

The leading scorer for Bridge City was Britten who hit all five of his free throw attempts and finished with 20 points. Gutierrez was five of six from the line and had 16 points. Breaux scored 11 points and made three of four free throws for the Cardinals.

Cooper of the Mustangs matched Britten for high point honors with 20. Andrew made 8 of 10 from the free throw line. The Davis brothers both had strong games with Jamikael registering 9 points and Geramicah producing 8 points.

Cardinal Coach Randall Robertson was obviously pleased with the win over West Orange Stark. "That was unbelievable how those last few seconds unfolded, but I couldn't be happier for our guys sticking in there and fighting to the end. Again we found a way to get it done in a hostile environment on the road. They're all big in our district, I'll take it anyway we can get it, it's a big one for us," Robertson concluded.

The Cardinals won another important district game earlier in the week on Tuesday night in the Competition Gym at Bridge City. Bridge City defeated the Jasper Bulldogs 47-39 to improve its record to 3-2 in district.

Lincoln Breaux and Linder each hit a field goal in the second quarter for Bridge City. Britten stayed hot shooting the basketball sinking two more threes and a two point basket to give him twenty points through two quarters. The Cardinals enjoyed a seven-point lead 29-22 at the half.

Fernando Rodriguez got in the scorebook in the third quarter sinking two free throws and nailing a three pointer. It was more of the same for Britten who scored seven points on three baskets. The Cardinal advantage was stretched to thirteen points 43-30 with a quarter to play.

The scoring was kept to a minimum for Bridge City in the final quarter. The Cardinals' only points came on two buckets by Breaux but it was enough to secure the 47-39 victory. 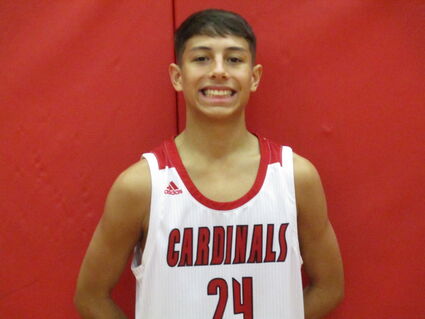 The high scorer for Bridge City with 27 points was Britten who hit seven three pointers in the game. Walker also had 3 rebounds, 2 steals, and 2 assists. Breaux finished with 8 points and Linder added 6 points.

The first half of district play concluded on Friday, January 20. Silsbee (6-0) is at the top of the standings. Bridge City (4-2) and Lumberton (4-2) are tied in second place but the Raiders did win the earlier game between the two teams. Little Cypress Mauriceville (3-3) and Jasper (3-3) are tied for the final playoff position currently with the Bears winning their first district game with Jasper.

The Bridge City Cardinals played at Silsbee, and the Little Cypress Mauriceville Bears had their second half bye on Tuesday. The big game on Friday will be Bridge City playing at home against LCM in the Competition Gym at the high school.