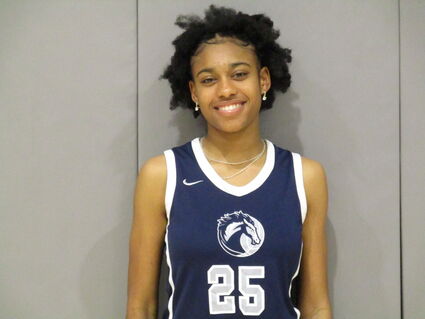 Just four games are left on the district schedule for the three local Class 4A girls basketball teams. Two of the three teams still have hope of a berth in the state playoffs in three weeks.

The Little Cypress Mauriceville Lady Bears (6-2) are tied with the Jasper Lady Bulldogs for second place in District 19-4A. The West Orange Stark Lady Mustangs (3-5) snapped a four game losing streak in district to be in fifth place a game out of the fourth and final playoff spot. The Bridge City Lady Cardinals are still looking for their first victory in district.

The Lady Bears and the Lady Mustangs played Tuesday, January 17, at West Orange Stark. The first meeting in the opening game of district was won at home by LCM by just four points, and the second meeting started out to be just as close for the first two quarters.

West Orange Stark took an early lead before Little Cypress Mauriceville came back to go up by one point 19-18 at the half. The Lady Bears increased their margin and won 39-22 holding the Lady Mustangs to just four points in the second half.

Lady Bear Keylie Washburn led LCM with 24 points. Jordynn Patton was the top scorer for the Lady Mustangs with 10 points.

The first quarter was low scoring. Nicole Sasser hit a three and MaKenna Knight made a field goal for Bridge City to put the Lady Cardinals ahead 5-2 going to the second.

The Lady Cardinals played another good eight minutes as Knight hit a three pointer while Sasser and Kennedy Campbell added field goals. Bridge City enjoyed a 12-5 lead at the half.

The comeback started in the third quarter for the Lady Mustangs. They won the period 9-6 to reduce the Lady Cardinals lead to just two points 18-16 with one quarter to go.

The fourth quarter saw West Orange Stark almost match their point total from the first three quarters scoring fourteen. The Lady Mustangs won 30-27 for a sweep against Bridge City in their two district games together.

West Orange Stark played on Tuesday, January 24, at Vidor. The Lady Mustangs beat the Lady Pirates in an earlier district game. Bridge City played at home against district leader Silsbee on Tuesday. The Lady Bears had a bye.

On Friday the LCM Lady Bears play at the Dr. Pauline Colburn Hargrove Gym against the Bridge City Lady Cardinals. The West Orange Stark Lady Mustangs need an upset against the Lumberton Lady Raiders to maintain their playoff chances.