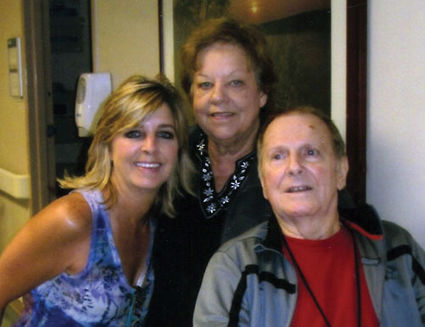 A few weeks ago, Tami Guidry, of Bridge City, read an article in The Record about a contest to award a deserving caregiver a cruise for two and care for their loved one while away on the trip. That sounded wonderful to Guidry. She had always wanted to go on a cruise and recently missed out on one with a good friend, Stephanie Edgerly.

Edgerly and her husband recently celebrated their 25th anniversary with a cruise out of Galveston. All though Guidry’s daughter Mallory went on the trip, Guidry had to pass. She has been looking after her father for the last two years, since his first stroke. Her mother’s health isn’t the best either.

Edgerly said she felt so bad when she watched Guidry drive off from the dock. “It broke my heart she couldn’t come.”

Guidry’s daughter and Edgerly’s son, Alex, have been dating for seven years and the familes had previously taken several vacations together.

“When I saw this article in the Penny Record a few weeks ago about a free cruise for caregivers I texted Stephanie Edgerly jokingly and said ‘Please nominate me!’’’

Guidry continued, “Stephanie herself knows all too well the emotional rollercoaster that comes with being a caregiver, as she helped with her parents and just last year her brother-in-law, Todd Edgerly who lost his fight with cancer.”

“Being a caregiver is truly one of the hardest jobs I have ever had to do,” said Guidry. “It is harder than parenting because when you care for an adult parent, they still have their independence, their dignity and their way of doing things. They still fight for that independence and I would never take that away.”

“I try to balance work, family and caring for my parents. It is a daily task. Some days are easier than others. Some days it gives me much joy and some days it puts me in a bad place, but I try not to let it get me down,” said Guidry. She has left work twice under the Family Medical Leave Act the last two years.

Guidry is the secretary at Bridge City Intermediate School.

“My husband and friends always try to make me see the bright side of the situation. Things could always be worse.”

On April 22, 2011, Guidry’s dad, Rodley Faulk had his first hemorrhagic stroke after working hard in his yard the day before.

“We were told to say our good byes at the hospital in Port Arthur,” said Guidry. Her father was transferred to Beaumont to see a neurologist. He underwent brain surgery to relieve pressure. Moved to a neuro recovery hospital in The Woodlands, Faulk had paralysis on the left side and was over medicated. He was deteriorating. They were told to bring him home under hospice care and let him go.

Unwilling to listen, they nursed him back to health and within three months, found him standing up and trying to walk to the bathroom.

A few months later they were able to get him into TIRR rehab in Houston for four weeks.

Guidry said everyone danced down the halls for his farewell party.

“Before summer was over, I had him back on his zero turn lawnmower and weed eating the yard,” said Guidry. “I was able to witness a miracle that year.”

On Feb. 6, 2013, the same day his first great-grandbaby was born, his symptoms returned. They called 911 and the same process began again, minus the brain surgery.

Guidry’s mom, Carol Faulk, had a heart attack in August of 2011. That, plus an inoperable back with nerve damage, prevents her from bending or lifting.

Guidry has siblings that help with therapy, appointments and things that need to be done around the house, but they live out of town, while Guidry lives across the street and a few doors down from her parents. That puts most of the care of her parents on her.

She is not complaining about caring for her parents. “I would jump thru hoops to make life easier for them. They are wonderful people,” she said. Guidry also said she would not have been able to do it this second time if she hadn’t had the help of her nephew, Taylor Faulk.

After two years, most caregivers could stand a break, but many don’t get one.

“Winning the free caregiver cruise giveaway would be so fantastic,” said Guidry. “I have never been on a cruise and having the free sitter service to take care of my parents would make it easier to leave. I don’t go far from home right now because you never know when the hour of need may come.”

Guidry asked Edgerly for the help because she knew Edgerly was a ‘mover and shaker.’ “Work your magic,” she told Edgerly. And she has. Edgerly wrote up and submitted the nomination that day.

A couple days later, Edgerly texted Guidry and said, “Don’t ask me to do something unless you want it done 110 percent.”

“At first it was going very slow. Then I started e-mailing every person that I had. ‘Please vote, please vote. I’m sorry for bothering you, but please read the article. She so deserves this,” wrote Edgerly.

Edgerly submitted Guidry’s name on July 24. There were over 3,000 nominations and Guidry was at 305.

At press time nominations have grown to 6930, with Guidry ranked at number 11. Voting continues through Aug. 24 and The Record readers are asked for their help to make this dream come true. Vote for Tami Guidry at http://cruise.caregiverstress.com/entries/tami-g/ .

You can vote once a day on each electronic device. They have also discovered that you can vote once a day with each browser if you have more than one, such as: Internet Explorer, Safari, Google Chrome or Firefox. Each day you can vote after 7 p.m. for the next day. Guidry was at number 26 last week and has climbed to 11 with Edgerly’s efforts. They are hoping adding votes from The Record readers will seal the deal at the end of next week.

“What a great thing for this company to do for caregivers. I wish everyone that has been nominated could win,” said Guidry.

Tami Guidry (left) is pictured with her parents, Carol and Rodley Faulk taken last year. After two years of caring for her parents, Guidry is hoping to win a contest offering a free cruise to the winning caregiver. You can vote for Guidry online at http://cruise.caregiverstress.com/entries/tami-g/