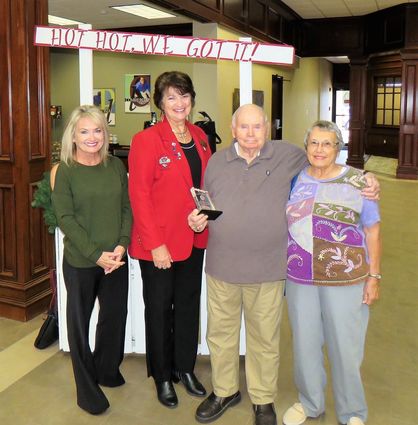 The announcement was made at the Chamber’s November Networking Coffee held at Bridge City Bank.

After serving four years in the Navy during World War II, Litton attended SFA University, earning his Bachelor’s degree in 1953 and his Masters in 1956.

While at SFA, he played football and was a letterman for the Lumberjacks.

His first coaching job was for the Hemphill Hornets.

From there his coaching career included Jacksonville, Vidor, Orangefield, and Bridge City.

In 1964 he became the first certified National Athletic Trainer at the high school level in Southeast Texas.

Training became his passion, and after retiring from BCHS in 1987, he went to work for Lake Charles Memorial Hospital as a sports medicine consultant until 2008, and continued taking care of young athletes in this area, as far as Hemphill and Anahuac.

In 1999, Litton was inducted into the Southeast Texas Coaches Association Hall of Fame.