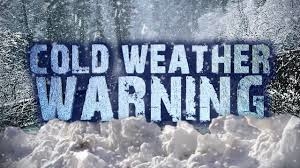 Pipes are bursting and so is the Kleenex budget as Orange County and the rest of Southeast Texas sniffles, shivers and coughs its way through a sub-freezing start to 2018.

Baby New Year arrived in Orange to find local temperatures at 34 degrees, according to the National Weather Service.

But that did not last for long. By 1 a.m. Monday, the storm that blanketed the Midwest and northeast in sub-zero chill factors and threatened the Florida panhandle with snow, had Orange County in a freeze for 17 hours on Jan. 1 and for all but three hours Tuesday.

The chilly temperatures were blamed for a New Year’s Day power outage in Bridge City that left nearly 1,000 addresses with no lights or electric heat for most of the morning.

The outage affected 970 customers for about three and a half hours, he said.

The forecast for Wednesday called for a low of 21 but the start of a warming trend with temperatures up to 43.

Tuesday afternoon’s long-range forecast called for highs in the 60s early next week, with a chance of rain rising from 20 percent Saturday night to 50 percent Sunday night.

A hard freeze warning was in effect overnight Tuesday, Jan. 2, with wind chill making it feel like 10 or 15 degrees.

Orange County partnered with the Red Cross and Salvation Army to set up a “warming station” at the Salvation Army, 1950 Martin Luther King Jr. Drive.

Nationally, an East Coast winter storm is expected to bring hazardous winter travel conditions from the Southeast United States to New England through Friday, with the worst conditions expected along the immediate Eastern Seaboard from the Carolinas to Maine, NWS said.

Bitterly cold temperatures and dangerous wind chills will persist east of the Rockies into the weekend, as lake effect snowfall will continue downwind of the Great Lakes.

Reinforcing shots of arctic air will continue across much of the Eastern half of the country through this week keeping afternoon highs as much as 10 to 20 degrees below normal.

Meanwhile, an area of low pressure developing over the Bahamas by Wednesday morning will rapidly deepen as it

moves northward off the East coast Wednesday and Thursday. Given the cold air locked in place, this will allow for potentially significant wintry precipitation to spread along the East Coast from the Florida panhandle to

As much as a quarter of an inch of ice and a couple inches of snow, with locally higher amounts, are possible from portions of the Florida panhandle to eastern North Carolina tonight and into tomorrow. By Wednesday, heavy snowfall will begin to develop along the Mid-Atlantic

coast and into the Northeast, mainly along and east of the I-95 corridor.

The highest snowfall accumulation is expected across eastern New England where upwards of 6 inches is possible. In addition to wintry precipitation, high winds and dangerous wind chills are expected by Thursday across much of the Northeast as the Atlantic surface low rapidly strengthens off the coast.

Out west, rain will move into California and the Pacific Northwest by Wednesday evening as an upper level system over the Eastern Pacific approaches the region. Above normal temperatures are also expected to continue across much of the Western states.