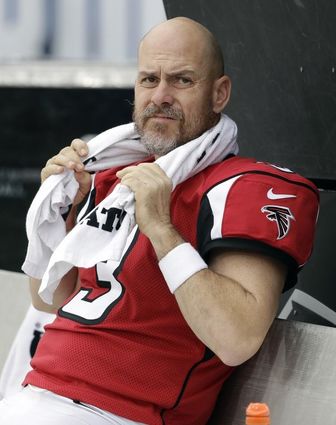 It’s that time of year and Bridge City’s Matt Bryant has been a busy man.

The 42-year-old place-kicker for the Atlanta Falcons has made 11 straight field goals in his last three games, leading his team to the second round of the NFL playoffs.

The wild card Falcons, coming off an 26-13 upset win over the Los Angeles Rams, are favored by some to knock off the NFC’s top seed on the road at Philadelphia Saturday.

“I’d say that even after 17 games we haven’t played a complete game,” said the 16-year vet. “This past game against the Rams was probably the closest we’ve been.

“But once you get to the playoffs, it’s the best against the best.”

Bryant is the third-oldest player in the NFL, younger than only kickers Phil Dawson of San Francisco, 42, and Adam Vinatieri of New England, 45.

The former Baylor Bear was the best kicker in the NFL a year ago, hitting 91.9 percent of his regular-season 3-pointers.

This year, Bryant actually kicked as many regular season field goals – 34 – but two more misses lowered his success rate to 87.2.

He hit five field goals two weeks ago against Carolina, including a 56-yarder, in a 22-10 win.

“Once we cross the 50, I just start warming up,” he said. “The mental aspect is no different [for a long kick]. I just get ready for the next kick when it comes around.”

“From a team standpoint, we talked about it one day and it was done with,” the kicker said. “The fact of it is there’s nothing that anybody can do.”

When the Falcons started the season 4-4, people counted them out.

“To be honest with you, I think last year, in the middle of the year, our record was very similar to last year,” he said.

The Falcons were 4-3 near the halfway point last year.

A year ago, Atlanta was the NFL’s highest scoring team, averaging 34 points per game. The team ranked 13th at the end of this regular season, averaging 22.3 points.

The difference showed up in Bryant’s extra points total. He had 22 fewer PATs this year.

There was a sense a year ago that Bryant might have retired had the Falcons won the Super Bowl – he didn’t rule it out. But he said Monday he plans to be back for the 2018 season.

“My plan is to still play a couple of more years,” he said “I’ll still be able to maintain my strength and my distance on my kicks.