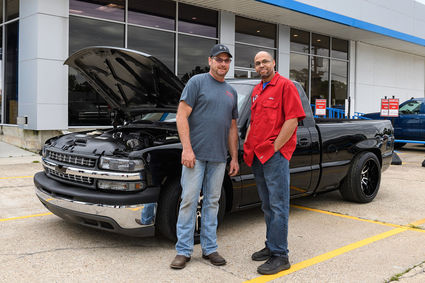 All the upset caused by Hurricane Harvey has made this the most memorable graduating year ever for Little Cypress-Mauriceville seniors.

The storm also resulted in quite a story and gift for LCM’s Project Safe Graduation.

Drew and Amanda Morris of DCM Fabrication are raffling off a classic 2000 Chevrolet pickup and donating the proceeds to Project Safe Graduation. “It turned out real nice,” said Drew Morris, whose stepdaughter is in the LCM Class of 2018.

Raffle tickets are $50 each and are available at Granger Chevrolet, 2611 MacArthur Dr .; at DCM Fabrication, 2989 Little Cypress Dr .; the Evadale Raceway and this weekend at the Mauriceville Crawfish Bash.

The truck will be in Saturday morning’s parade at the Crawfish Bash and will be featured in a car show at the Evadale Raceway, beginning at 10 a.m., Saturday, May 5.

The raffle drawing will be at 7 p.m. May 5 at the Evadale Raceway.

Morris received the truck after it was flooded by Hurricane Harvey in Deweyville. But this is no flood-damaged vehicle after Morris and his crew got through.

“It was flooded, but every last bolt on it has been removed, along with every wire. We had the frame sandblasted and painted and we started from there,” he said.

Morris worked on the car in the evenings, after he got home from his job. Another set of LCM parents, Eric Harbert and his wife, assisted. And the finishing touches came with a visit of a friend from Las Vegas, Luis Planas of Kreative Street Designs.

Planas appeared on the MTV show “Pimp My Ride.”

The result is a sweet ride complete with a Superchargd 6.0 LS engine.

“Cars are just a hobby for me,” Morris said. “This was a complete frame-off restoration. I’d say there’s at least 200 to 300 hours in that truck, but looking back, we did a year’s worth of work in four months.

“We tried to get as many donations as we could, and we got parts donated and money to help with buying parts from several of our vendors.

“It was a challenge.”