Over the years and going through several hurricanes the campus now sports several new buildings. The newest being the Cypress Center that was renamed Tuesday night as the J. Michael and Bridget Shahan Events Center for their service to the college.

Local and state dignitaries along with officials from the Texas State University System were attendance in honor of Shahan who will be soon retiring.

Gwen Whitehead, vice president for academic affairs, set the tone for the evening when she said the renaming was a happy and momentous occasion for their "fancy building." She added that it's named for someone "very, very special."

Brian McCall, a chancellor with TSUS, said the regents are proud to name the building after Shahan.

State Sen. Robert Nichols said he met Shahan seven years ago after he was elected. He said they worked well together and they got what the college needed, like the Cypress Center.

"We had a great (legislative) session in 2015 and this building is the fruit of that labor," Phelan said.

David Montagne, Orange resident and TSUS regent, said the place (LSCO) was "really sinking low" before Shahan. Now it's reaching new heights. He added that Shahan is a good person and a good man. Montagne also chaired the search committee for the new LSCO president.

Shahan said he wouldn't had reached his accomplishments without the help of his wife, Bridget.

"I can't say enough good things about Chancellor McCall. He's one of the easiest persons to work with and he let's a president be a president," Shahan said.

Also, Phelan and Nichols have been the best of the state officials he has worked with because they are attentive and responsive. 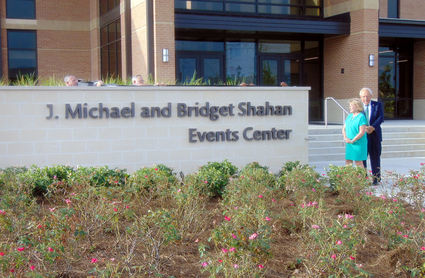 The Cypress Center will be renamed the J. Michael and Bridget Shahan Events Center on campus as the Shahans look on.

Shahan thanked Sam Monroe, longtime president for Lamar State College- Port Arthur, for hiring him 41 years ago. That was the last job interview he ever had.

He next thanked LSCO staff and faculty for their service.

"They're a great team of people. They work hard and they play hard. They care about each other," he said.

He also gave a shootout to the LSCO Foundation for their support, particularly longtime chairman, the late Carlton "Corky" Harmon, who helped him with real estate matters.