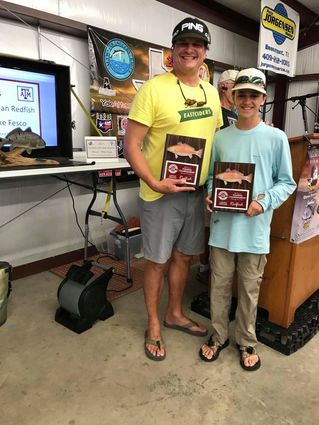 Photo: Will Jenkins and his son, Gator won 1st place in redfish stringer category with 3 reds that weighed a total of 19.84 lbs. Best of all they were all 3 caught on a Fly rod from a Sabine Skiff boat.

“I think Jeremy and I are in a good position,” said Tony Viator while standing in the broiling heat watching the final teams weigh in at Saturday’s IFA Elite Redfish Tournament.”

His casual assessment was somewhat conservative as he and his partner, Jeremy Reeves, were currently occupying the number one spot with a two fish limit weighing 17.87 pounds. “It always takes a little luck to win,” said Viator, “but we were due a little after our last two tournaments.

“We were on our way to our first spot in the last one when a broken prop shaft ended our day before making the first cast.” The good luck that he alluded to in this event, however, was more a case of persistent grinding than luck.

“Jeremy and I got off to a great start and had over fifteen pounds early. We caught and released a number of fish, but couldn’t upgrade and elected to cruise the open lake hoping to find some larger schooling fish.”

When that tactic failed to produce, they elected to make another quick run back to the marsh before calling it quits.“We had just started drifting down a cut and I was talking to Jeremy when my cork disappeared,” said Viator. That fish weighed a tad over nine pounds and earned the winning duo a $30,000 boat, motor and trailer.

“As soon as I caught the big fish it went belly up in the livewell,” added Viator.“We made the decision to go ahead and run back a little early rather than lose a half pound for a dead fish.”

“What was even crazier,” added Viator, “was that I nursed that fish all the way back to the launch hoping to keep her alive, but she just wouldn’t swim upright in the livewell.Then, when we get ready to weigh her in she explodes out of the bag like she’s happy to see everyone!”

The tournament was very much a feast or famine event for the forty-nine teams that entered.While several of the teams reported going through large numbers, twenty-two of the teams failed to weigh in a single fish.

Quite possibly no other team was any more frustrated than James Sparrow and Reid Reynolds. “We released several heavier fish an eighth of an inch too long and culled slot fish all day long and now it looks like we are going to finish one spot out of the money,” said Sparrow.They did in fact do just that with a 14.11 pound catch!

The folks fishing the annual Texas A & M benefit event out of the S.A.L.T. Club on the same day found their fair share of redfish as well. Will and Gator Jenkins avoided the crowds and won the heaviest stringer award fly fishing the backwater.Their three fish catch weighed 19.84 pounds!

While talking with several of the teams loading up their rigs after the redfish tournament, trout fishing inevitably found its way into the conversation.“We caught two trout during the tournament that might have been keepers,” said Reid Reynolds. “Who would have ever thought?”

We have had a few days when we found small keeper trout, but by in large they continue to be a “no show” in Sabine Lake.I have heard every theory imaginable in an effort to explain the phenomenon, but the bottom line is that the numbers just aren’t there.

The fact that the beach front has produced some great catches of solid trout when the water flattens out and clears up indicates that they are not far away, but thus far the numbers have not returned to the lake. Calcasieu and Galveston anglers have suffered much the same fate, but not nearly as bad as the current drought that we are experiencing.

The current conditions are not the problem.The salinity is out the roof as we are seeing both sharks and porpoises in the river, balls of shad are all over the lake and we are covered up with gafftops and lady fish.Only last week we saw a number of sheepsheads and drum foraging for crabs along the shoreline.

Catching redfish has not been a challenge and the fact that we caught two flounder and fourteen trout in the same week was encouraging.Colder weather and more shrimp in the open lake will hopefully turn things around, but only time will tell.