Her name was “Sally”

If you are lucky enough in your lifetime to spend any amount of time with a good dog you should count yourself fortunate because they are rare and very special.

Every “dog person” I know would agree that the unconditional love of a good dog is a wonderful thing and should be experienced by every person at least once.

I read a quote once that said “If you ever want to see who really loves you lock your wife and your dog in the trunk of your car for an hour and see who is happiest to see you when you returnto let them out”.

That sums it all up for me right there.

Back in November of 2004 I was fortunate enough to have a great dog come into my life and she blessed me with 13 years of companionship that I will be forever grateful for.

Her name was Sally, she was a small framed black female lab that was given to me by my good friend Dow Gene Anderson.

Sally came into my life at just the right time, I had just lost a young male lab named “Tuff” when my truck was stolen in Houston and at the time both myself and my son Hunter were just devastated.

From day one Sally began to help heal our wounds and until her last breath she continued to fill our lives with joy.

I brought Sally home when she was 4 months old and took her on her first hunt not long after that.

I can still remember her first retrieve, she picked up a snow goose like she had been doing it for years.

I still laugh at the image in my mind of that little black lab trotting back to the blind with the wing of that goose covering up he eyes and causing her to run in circles while searching for my voice.

Sally picked up three limits of speckled bellied geese and a few snows on that first hunt, I knew right then and there she was special.

As she grew and matured it was evident that she was different from most labs, she was stand-offish and rarely let strangers get close to her unless we were in a truck, boat, or duck blind and then she turned into everyone’s best friend.

In her prime Sally produced countless retrieves that are permanently etched into my fondest memories.

I watched her run down a Canada goose in Amarillo and pluck it out of the air like a shortstop chasing a soft line drive.

She took a pheasant out of the air in front of a crowd of hunters at a shoot on a preserve in Louisiana that brought on a chorus of cheers by all in attendance.

Then there was a 600 yard retrieve on a snow goose that had sailed across a field of winter wheat in El Campo that prompted me to put my gun away and tell my fellow hunters “I’m done because it’ll never get better than that”.

There was also the time in Rockport where she jumped over the top rail of an elevated blind down to the water some 6 feet below to chase down a crippled redhead drake some 200 yards downwind of us and bring it back like it was a stroll in the park.

One of my favorite retrieves Sally pulled off was one I never saw, I only heard it.

In a thick fog I had 3 green winged teal come out of nowhere and I managed to knock one down but never saw it hit the water.

Sally jumped out of the blind into the thick white fog and disappeared with only the sound of her swimming and breathing to be heard.

I sat there and listened to it all unfold right there in front of me.

Sally swam to the levee, got out into the grass, dug around for a minute and then jumped back in the water.

The breathing sounded different because she had a mouth full of teal and all I could do was smile because in my mind I saw it all.

These memories make me realize how privileged I was to not only be in her presence but to have had her in my life.

At 9 years old Sally had begun to lose her hearing, in fact it got so bad I actually lost her in the marsh on opening day of the 2013-14 season.

After retrieving a duck she swam to the bank instead of the blind and kept going.

After searching for her for hours I headed home, both Hunter and I were in tears until my phone rang letting me know someone had found her.

The good Samaritan who found her said “she just walked up into our pond and came right to the blind and she had a duck in her mouth too”.

It was at that point that I decided to retire Sally from hunting and let her enjoy her later years lounging around the pool and eating good food.

From time to time I couldn’t resist taking her out and letting her retrieve 1 bird, I felt like I owed it to her.

I would set out decoys and shoot the first duck I could that would land close to the blind.

Like she had done thousands of times before but at a slower pace she would make her way to the bird and come back like clockwork.

Those “one bird” were perhaps some of the best ones we made together because I knew the clock was ticking and she wouldn’t be around forever.

Over the years we traveled countless miles together and every one of them was great.

It was difficult to see her slow down but every now and again she would get rejuvenated while playing with my younger dog Joli.

I truly think having that young dog around helped keep her young at heart and enriched the quality of her life in later years.

This past Sunday evening Sally passed away at home while lying in my arms on my back porch.

It was difficult and emotional to let her go but she went on her own terms while surrounded by her family. 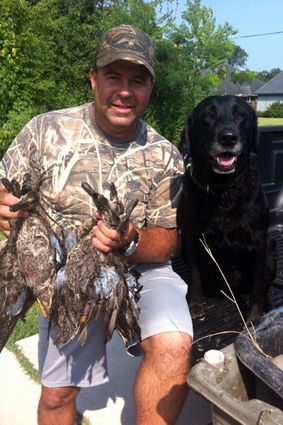 Hunter and I buried her in one of her favorite spots in our backyard, under an oak tree where she would lay in the shade while surveying her “kingdom”.

The last few days have been awful tough but I know she’s doing fine now.

Hopefully she has plenty of tennis balls to chase and a pond with a hard bottom and plenty of ducks.

All I know is that I am better for having her in my life and I can only hope she would say the same thing.