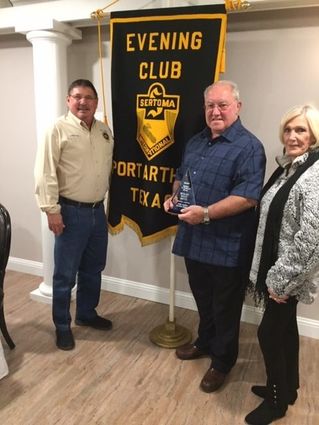 Congratulations to Richard “Buggar” Minter (center) from Bridge City for receiving the “Service to Mankind” Award from the Port Arthur Evening Sertoma Club.

Minter was honored for his work in the community with PTSD combat veterans and for working with combat vets at the Stiles Unit in Port Arthur.

He also volunteers with the St. Kolbe Prison Ministry and the yearly Special Angels Rodeo.

He serves as a Eucharistic Minister at St. Henry Catholic Church and is an active member of the Bridge City Knights of Columbus.

He and his wife, Donna, have two children and 7 grandchildren.

He was honored at a banquet at Benton’s on Nov. 13.

Shown presenting the award are Sertoma President, Aaron Matte (left) and Mae Terro (right), Sertoma Chairman of the Board.