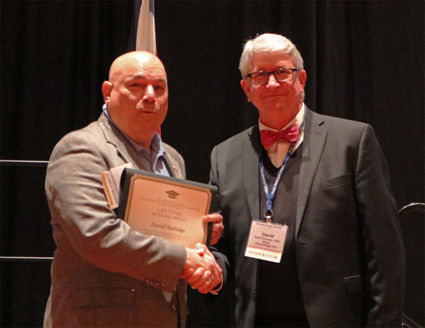 Photo: Mayor Rutledge is shown receiving the award from W.L. Pate, the outgoing President of the Texas Association of Mayors, Council members and Commissioners and a Beaumont City Council member.

This is Mayor Rutledge's fourth straight year to receive the award. This designation was presented at the TMLI Awards Ceremony at the Texas Municipal League and Texas Association of Mayors, Councilmembers and Commissioners’ Elected Officials’ Conference in San Marcos in February.

The recognition honors individuals who completed 72 or more continuing education units (CEUs) during the 2018 calendar year, and is the top award in the TMLI program. The 72 CEUs must include two hours of open government training. Forty-five Certified Municipal Official designations were earned statewide.

"Obtaining the necessary hours for receiving the Certified Municipal Official award takes a lot of time, but the knowledge gained is so beneficial for both the elected officials and the city as a whole," Rutledge said.

"Texas Municipal League offers a lot of great courses for newly elected council members as well as those with several years of experience" Rutledge said. "They're a great way to learn about, among other things, how to govern effectively, laws that apply to city councils in Texas, and interacting with the public we represent as well as state and federal government officials."

"I was surprised and humbled that the Board of Directors asked me to stand for election to the Board," Rutledge said. "I will try to make sure their trust was well-placed and will work hard on behalf of all the citizens and cities of Texas."

The purpose of the TAMCC is to promote the proficiency of elected municipal officials and encourage and improve the cause of good and efficient municipal government in the State of Texas.