Fresh veggies are one of the best things about spring and summer. Unseasonable weather pushed back harvests this year, so farmers markets are opening later than usual. Saturday will be the first day of the season for Bridge City Farmers Market and the North Orange County Farmer’s Market started opening on Thursday evenings in Mauriceville just two weeks ago.

“The rain really hurt us this year,” said Jim Frasier, an area farmer that sets up at both markets. He said the cold had an impact too, but the rain was the biggest factor. Frasier always has fresh and frozen blueberries and blueberry bushes. He said he will have lots of squash and rose bushes available too.

Frasier said tomatoes are starting to come in and cucumbers too, but that is the extent of what is currently available, locally.

“Okra isn’t ready yet,” He said. “I’ll have pintos, cream and purple hulls (peas), but they are about three weeks out. If anybody else has them, they weren’t grown here, because I planted early.”

He advises if a vendor has these items before the next three weeks, be sure to ask if they were grown locally. Frasier said there are a couple of vendors in the area that are bringing produce in from Houston. He especially advised to ask, this week, if they seem to have an abundance of tomatoes, as the fruit is just now ripening locally and should be in short supply.

There are usually canned and baked goods also available, plus things such as homemade soaps, honey and more.

“There were fresh yard eggs at Mauriceville and I heard there may be milk this week,” said Frasier.

Bridge City usually also has a variety of crafts available.

Initial hours announced for Bridge City are 8-11 a.m., but they are subject to change. The BC Farmers Market is located at 101 Parkside Drive, in the field next to the Senior Citizens Center behind the Community Center. 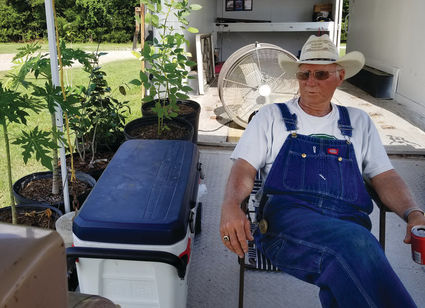 Frasier said vendors tend to set up earlier than the stated hours. “Remember, the early bird gets the worm,” he said.

If you are interested in being a vendor in Bridge City, send a message on their Facebook page or call (409)313-0161 and leave a message.

The North Orange County Farmer’s Market is located at 7441 Cohenour Road, Orange, 77632. It is just off of State Highway 62, under the pavilion at the Mauriceville Crawfish Bash grounds. It opens 5-7:30 p.m. each Thursday during the growing season. Contact for vendors is through their Facebook page or text (409) 659-3998.

Selection will vary at each location and week to week, depending on what is available and vendors attending.