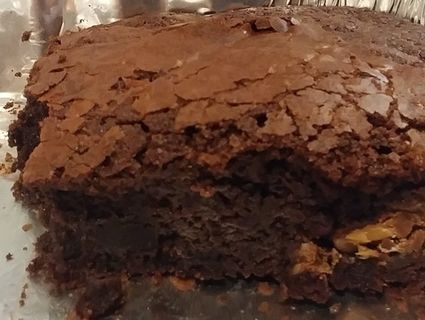 These brownies are not from scratch, but are so rich with my friend's

special ingredient. Believe it or not, they taste like scratch brownies!

2 boxes of generic brownie mixes, such as Wal-Mart or Kroger brands

plus ingredients needed on back of brownie boxes

Prepare one brownie mix according to box directions, adding the vanilla

and cinnamon. Then, spread mixture into pan, but do not cook yet!

Now, break the Symphony chocolate bars where they are scored/divided,

completely covering the uncooked brownie mix in pan with the candy.

Finally, prepare the other brownie mix according to box directions, adding the vanilla and cinnamon. Once again, spread this second brownie mixture on top of candy this time. Bake at 350 degrees for about 50 minutes, depending upon your oven. You know what I mean, everybody!

Let the brownies cool. Just remember, the brownies are a little hard to cut after you refrigerate them, so cut them before placing in fridge. Rich,

chocolaty, high in calories, but very good to eat, chocoholics! Thank you to my friend, Katy Latiolais of Bessie Heights.