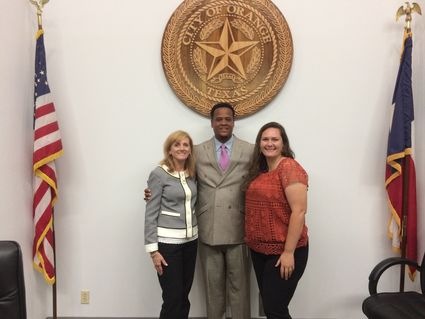 Photo: Stacey Gautreau, left, and Connie Curphey of Dow Chemical share the good news with Orange Mayor Larry Spears, Jr., about a $20,000 grant from the company to sponsor free concerts in downtown.

Dow Chemical, the new kid in town, continues to bring its own housewarming gifts to the city of Orange.

At Tuesday night’s City Council meeting, the company now operating the 70-year-old DuPont plant announced a $20,000 grant to put on a series of downtown concerts in October.

She said a pair of free concerts titled “Together Thursdays” had been tentatively scheduled for Thursday, Oct. 10 and Thursday, Oct. 24 at the Riverfront Boardwalk and Pavilion in downtown Orange.

Details will be available in September, she said.

“This is a family-friendly concert series. Bring your lawn chairs and have fun,” Gautreau said. “We believe this is a great way to celebrate the diversity of our community and also, music is always a great way to come together.”

Orange Mayor Larry Spears, Jr., is a health and safety manager at Dow Chemical, who began years ago with DuPont.

“Dow also donated $50,000 to our local Little League organizations,” Spears pointed out, “and now they’ve returned to donate another $20,000 to give all the families something to do throughout the month of October.

“I’m proud not only to serve as they mayor, but to also be a Dow employee. One of the things I’ve seen that I want to publicly recognize is that Dow has given more local people a chance and opportunity for jobs than I have seen in a long time.”

A bit of bad news came out of Tuesday’s city meetings.

The much-anticipated construction of Jake Lemoine’s Boardwalk Grille restaurant on the riverfront has been delayed.

The city’s Economic Development Corporation agreed to extend the ground-breaking deadline for the $1 million investment from Sept. 1 to March 1, 2020.

It was the second extension granted by the EDC, which last year agreed to offer a $200,000 incentive to Lemoine for infrastructure improvements.

Kunst is not expected to take full control until the start of the new budget year, which isn’t until October.

The city held its first of two required tax rate public hearings as part of Tuesday’s agenda and no one stepped forward to speak for or against a proposed rate of 80.69 cents per $100 property value.

City council also accepted a budget for the EDC for the fiscal year 2020.

The budget included $2.5 million in expenses for EDC projects – including the Boardwalk Grille – and $59,000 to pay half the salary for a new city position, event manager-assistant EDC director.

Most of the anticipated revenues of $1.7 million come from the EDC’s sales tax revenue. The difference is to be paid from the EDC’s fund balance of $3.6 million.

Also on the upcoming calendar are a joint meeting of the council and P&Z commission at 5:30 p.m. Sept. 3; and a special 6 p.m. Sept. 17 meeting for citizens to discuss the tax rate, a night meeting requested by Councilman Patrick Pullen.