Mildred Prejean Piggott Purifoy turned 102 last week and celebrated with a pink birthday cake to match her outfit, one topped by a tiara befitting royalty.

“We celebrated and had a lot of company.”

Purifoy, a native of a Cajun community of Lawtell, La., was born in 1917 and never heard of the Great Depression when she lived through it as a teenager.

That was mostly due to living a remote life, out in the country, and maybe a little because she spoke only French until starting school.

She remembers living “way out in the country” and having to hitch “Bessie” to the buggy to get to church every Sunday.

The family’s “refrigeration” happened when her mother put meat in a jar, tied a rope around the jar and dropped it “way down in the well.”

She studied by the light from an oil lamp and after her mother died, she was expected to get married when she graduated from elementary school at 13.

Her dad was OK with her finishing school, though. So, she became the first in her family to graduate high school, then moved to Port Arthur to live with her sister and brother-in-law.

She met her husband, Terrell “TJ” Piggott, a merchant marine from Port Arthur when she was working as a waitress and cashier at a restaurant in Port Arthur.

In 1958, when Roundbunch was still a dirt road, they moved to Bridge City and were the first to build on Lafitte Street. 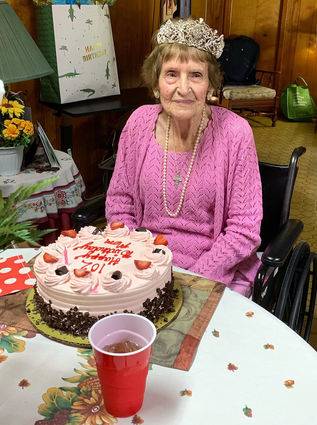 Mildred also has outlived a second husband, Edwin Louis Purifoy, who she met at a Senior Center and married in 2001.

So what’s the best thing about being 102?

“I think maybe the best thing is calling everybody’s attention to the fact that you can be 100 and still have your own home and be around your children,” she said.