County out to avoid port-a-potty stink 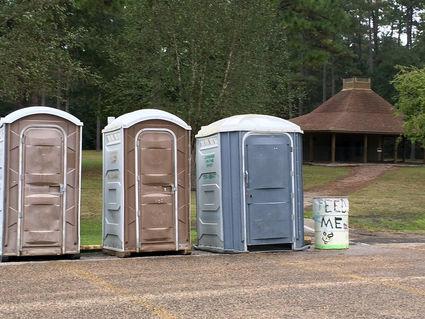 Photo: Port-a-pottys sit along the road in front of a condemned pavilion building at Claiborne West Park in Orange Tuesday afternoon.

Although Parks Director Sabrina Gray said nobody had yet raised a stink over the port-a-pottys that have become semi-permanent fixtures, they cast a spell on Tuesday’s pre-Halloween meeting of Orange County Commissioners’ Court.

Turns out the county has been paying $1,000 per month for three sets of men’s, women’s and handicap accessible chemical toilets since Hurricane Harvey two years ago.

Commissioners accepted the suggestion of Kurt Guidry, county maintenance director, to look into replacing them with a “portable restroom facility” such as those built onto tractor trailers and used in workers’ man-camps after natural disasters or during oil-drilling booms.

“So when we no longer need it out there, we could take it down and use it in other locations,” Guidry said.

Restrooms were built into the three for-rent picnic pavilions at Claiborne West Park. The pavilions, basically covered concrete slabs built around a center fireplace, were declared unsafe and off-limits after Tropical Storm Harvey.

The county’s building insurance provided $13,000 for new pavilion roofs but commissioners have been hoping that the Federal Emergency Management Administration would agree to reimburse at least 75 percent of the cost to replace the pavilions.

FEMA has not responded – thumbs up or thumbs down – to the county’s request and commissioners are tired of waiting.

They gave the go-ahead Tuesday to immediately use the insurance money and other county funds to proceed on two projects at the park – rebuilding the main office and the gutted-out shop building – and the rebuild of the Precinct 2 office in Mauriceville, all victims of Harvey’s 40-plus inches of rain in August 2017.

Claiborne West Park staff has worked out of the shop building there since Harvey.

“The shop is in horrible, horrible shape,” County Judge John Gothia said. “Over two years in and we’re paying crazy, crazy fees for port-a-potty to be out there. They have no bathroom.

“Even if we end up getting the [FEMA funds], we end up paying 25 percent on that, and 25 percent is far more than it will cost us, using our own materials and labor.

“We have just sat on this stuff for too long.”

Guidry and Gray said current plans call for the county to construct two large bathroom facilities at the park, one on either side of the park road. But no timetable for it has been set.

As of now, the county is still waiting to hear back from FEMA and other granting agencies on demolition and replacing the three pavilions.

But in deciding to go ahead without help from the Feds, Guidry said that, weather allowing, the office could be rebuilt in two months, once the general contractor is named.

“And I will have construction bids for commissioners to approve next week,” Guidry said.

Commissioner Theresa Beauchamp, who defeated Burton in 2016, has been operating out of temporary quarters since taking office Jan. 1, 2017.

She is currently housed next to the county’s Veterans Service Center on FM 1442, across from the landfill.

“That building needs to be in Mauriceville,” Beauchamp said. “The people out there need the presence.

“And the Sheriff’s Office [substation] will be part of that building. They need the presence of law enforcement also out there.”

In other business Tuesday, commissioners signed a resolution requesting that TxDOT lower the speed limit from 70 mph to 55 mph over an almost mile long section of FM 1442 in front of the various county offices along the curve that begins at Terry Estates and runs to the Convention & Expo Center.

They designated the former WIC building in Vidor be used as a permanent early voting and election day voting location after the Nov. 5 constitutional amendment election. This move will increase the availability of the nearby Raymond Gould Community Center – the current voting location – for community events.

He said, “As long as the county is continuing the debris mission, we need to continue the disaster declaration.”

Ardoin reported county entities had picked up a total of 27,243 cubic yards of debris already, with most – 16,435 cubic yards – coming from Vidor.

Washington hasn’t approved reimbursement for Imelda debris yet. But all 13 county judges whose jurisdictions were affected by the Sept. 18-19 storm are meeting next week to put together an appeal of FEMA’s initial declination.

The county fathers approved weekly bills payment of $378,128. Additionally, the county transferred $237,314 in quarterly court costs and fees to the state of Texas.