Photo: Martha Hughes of Orange pays tribute to the many military service members in her family during a Veterans Day assembly at St. Mary Catholic School Monday, Nov. 11.

Orange’s Martha Hughes wore red, white and blue Monday and wasn’t the least bit shy about showing off her patriotism.

It was Veterans Day and her grandchildren in Orange and Deweyville were taking part in their schools’ annual tributes to the men and women who have served in American armed forces.

She even took to the microphone during the assembly at St. Mary Catholic School and described how watching the new movie “Midway” over the weekend took her back to recall her childhood spent on an Army base during World War II.

Later, she recalled touring war memorials while traveling to Washington D.C. when her husband, Bill Hughes, was president of the Orange Chamber of Commerce.

“Everywhere we went, I cried,” she said.

Veterans Day is special for Martha, 81, because everywhere she looks in her family, there’s a veteran or two or three.

Her father, all three brothers, five brothers-in-law and two husbands went to war between 1917 and 1953. A flock of nephews and grandsons and at least one niece have since followed suit in Vietnam and the Middle East.

“We all were raised to be patriotic,” Martha said. “We love our country and the people in it. All the people.”

Her father, Paul B. Monroe and his wife Caroline were from Kentucky.

After fighting in France in World War I, Paul raised seven kids with Caroline. All three of Martha’s brothers were in the service and all three of her sisters married service men.

Martha’s brother Jim enlisted in the Marines when he was 15 and received two purple hearts for war wounds by the time he was 18, Martha said.

She said he was missing in action for a time on a Pacific island.

“I was about 5 and I just remember seeing my mother faint when they called on the phone to tell her they had found him,” she said.

Both Bill Hughes, to whom Martha was married 45 years, and Glenn Kirkland, to whom she was married eight years, spent about a quarter of a century in the Army on active or reserve duty.

Hughes, an engineer with the Army Corps of Engineers, had his own business as a contractor for Armco steel buildings.

Martha and Bill came to Orange in 1962. Bill was active in local politics and civic leadership. Martha volunteered for the Red Cross, Hughen School, the Chamber of Commerce and the Miss Texas beauty pageant.

The couple raised three boys and two girls. The boys all attended Texas A&M. A grandson is now a high-ranking member of A&M Corps of Cadets.

Martha, the youngest of seven children, grew up on military bases around Texas. Her father, Paul, returned from France to work in a civil service job building laundries for the ever-expanding Army and Navy bases. 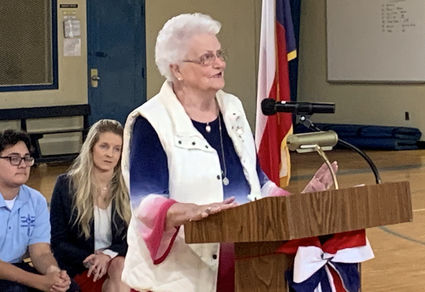 She said she and her two teenage grandchildren went Sunday to see “Midway,” which tells the how the U.S. military handed the Japanese Navy its first major defeat after a string of island-hopping successes that included a gut punch at Pearl Harbor.

“My granddaughter said the movie put together for her all the stories she’d heard and seen about World War II,” Martha Hughes said.

“It all flooded back to me. It was a reality to me. I remembered the German prisoners of war at Fort Hood that worked in the laundry with my dad.

“Before the movie was over, we all cried.”