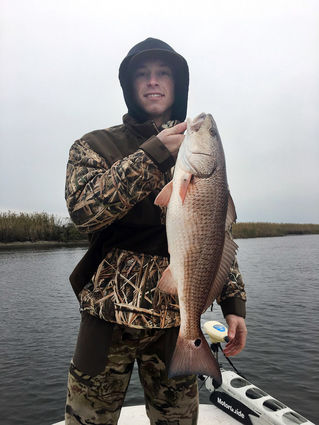 Winter fishing heats up when you locate productive structure.

Winter fishing heats up when you locate productive structure.

It's a common known fact that we have some of the craziest weather in the world here in Texas, especially on the coast. December, January and February have historically been some of our worst weather months, the conditions at this time of the year coupled with low water temps can make it down right miserable. During these periods the average fisherman may defer from the outdoors to a warmer climate by the fire thinking that the fishing won't be worth the effort, big mistake.

For many years fishermen on the lower coast have known what kind of magic can happen when the mercury dips and the crowds go somewhere else for the winter. This kind of thinking is gaining popularity on the upper coast every year and the fish that are being caught during this time of the year can be eye poppingly large to say the least. As an added plus once you find one of these big fish you can usually find another one in the same area, these fish will congregate

together and sometimes be there in large numbers. Big concentrations of fish can key in on small areas so be sure to thoroughly fish an area before giving up.

A couple of years ago on Sabine lake I came across one of these situations where the fish were piled up in a small drain, every cast was viciously attacked by a stud trout or oversized redfish. It was 2 hours of heaven, all you could ever ask for and more. The big fish were keying in on a small depression where two small ditches drained out of the marsh. The water was warmer coming out of the marsh and the depression offered up some refuge from the outgoing tide, the bait just kept pouring into the strike zone and the big fish were just killing everything that swam.

The small areas that most fishermen find holding good numbers of trout in the winter are usually found in the summer. Waders who are observant make notes of areas that should hold fish, piles of shell or oyster, ditches, transition areas from one type of bottom to the next are all excellent places to make mental notes. Summer water conditions are usually clearer than winter so you have the added bonus of sighting areas to fish. Winter and spring months on the upper

coast usually mean heavy run off and off colored conditions, homework and notes taken during the summer can really come in handy when you are faced with bad water conditions.

Calcasieu Lake also has it's own nuances during this time of the year and they are very similar to Sabine for the most part. One big difference between the two sister lakes is the prevalent reef structure caused by oysters on Calcasieu,

this body of water is full of oysters and those are trout goldmines if you know where to find them. In the winter if you pay attention you can watch the oyster boats comb Calcasieu, they are doing nothing but giving away very valuable information to the fishermen. I have marked some great structure by hawking these guys on bad weather days or days when the fish weren't to cooperative. That little bit of effort translated into numerous productive open water areas

that I fish to this day. You can learn plenty if you just watch sometimes. The one thing that you cannot get enough of is learning what window of opportunity works best,

take the tides and temperatures into account as well as the feed times and get out there among them. You can't catch big fish from your cozy couch. Remember "You won't know unless you go".