By Mike Louviere
For the Record 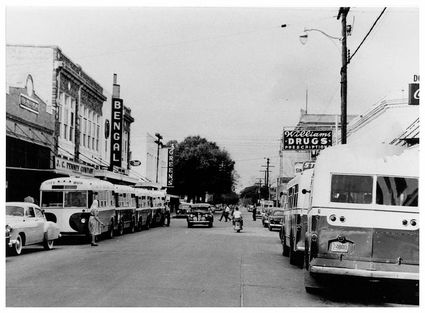 Fifth Street downtown Orange when it was the busy shopping district and the city busses were running.

Orange, Texas in the 1950s was a great place to be a kid. Orange had a burst of prosperity during the World War II years and an explosion of population due to the shipbuilding for the war effort.

Building warships had ceased but storing them was beginning. The U.S. Navy had built an inactive storage base in Orange and retired warships were being brought into Orange, along with Navy personnel.

The shipyards still had business but were downsized a bit. New industry was coming to Orange. DuPont had built a chemical plant and other companies were following DuPont.

For a kid in the 50s it seemed as though anything anyone needed could be found in Orange.

Fifth Street was the center of the Orange business district. Fifth Street had drug stores, eating establishments, clothing stores for men and women, doctors, dentists, and an eyeglass business. There was a bar and grill, Western Union Telegraph, a hotel, and two banks. On the corner of Fifth and Pine there was a funeral home. If you did not have a car, Orange had a city bus line to get you from your neighborhood to Fifth Street.

In downtown Orange there were three movie theaters. The Bengal was on Fifth Street, the Strand and Royal were on Front with Fifth running between them.

The Royal on Saturday had the "Kiddie Show", for less than a quarter you could see a double feature, cartoons, a serial with a good guy versus bad guys, newsreels, and a lot of previews of up coming movies. Kids liked Saturday at the movies because you got to see a lot. Mothers liked the Saturday Kiddie Show because it got the kids out of the house for several hours.

In the sidewalks on Fifth and Front Streets were sockets set in the concrete. On patriotic days, the American Legion would place American flags in the sockets and downtown Orange would have about 50 flags flying.

On Memorial Day there would be a parade and a contingent of sailors from the Navy base would march in uniform along with civic groups and service organizations.

There would be a large Christmas parade with schools, civic clubs, the Navy again, Santa Claus of course, and Edgar Brown on one of his fine horses with silver clad parade saddle and saddle bags full of candy he tossed to the kids along the way.

In July there was the rodeo parade, my favorite. Lots of horses, the Orange County Sheriff's Posse Drill Team, Mr. Brown with his bags of candy and whichever star was appearing at the rodeo that year.

The unlucky school band was the one that had to march behind the most horses. Band kids wore white shoes.

The rodeo in those years was a popular attraction and rivaled any rodeo in the region. One of the standout stars was Steve McQueen. He was starring in his TV series Bounty Hunter. His exploits in Orange were legendary.

Before the rodeo started, the county mosquito truck would come into the arena start the machine, then they would drive around the back of the bleachers spraying fog under the stands and onto whoever happened to be sitting in the bleachers. The folks operating the concession stand would at least drop the flap over the window to try to keep some of the mosquito powder off the food and drink. Don't ever remember mosquitoes being a problem at the rodeo.

Down south of town, the port was going full force. Orange had thousands of acres in rice production. Rice was shipped from Orange all over the world. When they were not loading rice, they were unloading bananas. Banana boats often came to Orange from Central America.

My grandparents had a friend who worked at the port as a night watchman. He would call my grandmother when a boat had unloaded bananas. We would take a bushel basket or two and go to the dock an gather up bananas that had fallen off of the stalks as they were being unloaded. That was a mixed blessing. It seemed like for months the sweets we had were all banana flavored, banana cake, banana pie, banana pudding, the list goes on.

I lived in north Orange on Link Street across the tracks from where Kroger is today. We were a gang of neighborhood boys that did things together. The favorite thing we did was ride our bicycles to the swimming pool. It was a long ride up Fourteenth Street, across Park, cutting over to Fifteenth Street and dodging traffic to cross Green Avenue to get to the pool.

The outdoor pool was probably the most popular place in Orange when it was open. It opened in the afternoon and stayed open until about ten at nights. Of course, when we rode bicycles, we had to be home before dark.

One night in May 1963 my friend Tommy Hubbard and I were at a club meeting in the First National Bank building on the corner of Fifth and Green. We had not heard anything unusual but when we came out there were police cars with flashing lights and fire trucks all over Fifth Street. We walked out into the street and saw Tommy's mother standing by Orange National Bank. We walked over to talk to her, and she told us the fire had been burning for some time. The east side of Fifth Street from Main Street to Front Street was ablaze. 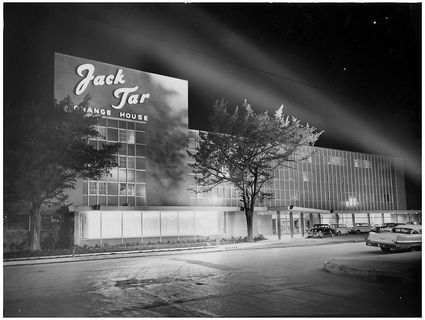 The night in 1957 when the Jack Tar Orange House Hotel opened. You can see two shafts of light that were from large spotlights mounted on a trailer parked on Division Street in front of the hotel.

Half of the downtown shopping on Fifth Street was gone after the fire.

Downtown Orange was changing. The new shopping center had been built and people were beginning to shop there, one attraction was free parking, no more feeding parking meters dimes and quarters. Some of the downtown businesses had gone to the new shopping center, and after the fire, more relocated there.

I left Orange in the fall of 1963 to go to college and never moved back. My mother and sister continued to live in Orange, so I never lost touch with my hometown.

I bounced around for years and finally settled in Ace, Texas. My mail comes out of Livingston, Texas. I live on a small lake I've got a dock and can fish in my backyard far removed from my old neighborhood in Orange. Sometimes, smoking a cigar on my patio and looking at the lake, I wonder where my old boyhood gang is and how they are enjoying life.