Seeing red is not always bad 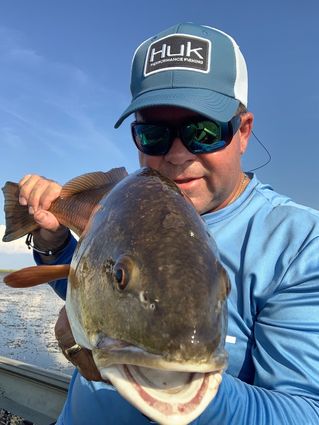 Redfish rank high on the list for coastal anglers.

I have no idea how it happens, it seems like only a few weeks ago summer was so far away and we were in the midst of a mini winter as successive cool fronts continued to remind us how nice 60 degree weather with zero humidity could be. All that is but a distant memory now as we have flipped the calendar and officially entered the dog days of summer. Welcome back the sweltering heat and humidity so thick you need to breathe through a snorkel just to cope with everyday tasks. Gone are the mornings where you wake up to the repetitive snapping of the flags as the big south winds keep them starched at attention form dawn til dusk and beyond. The summer months will usher in those days where you beg for a breeze or anything else that will provide relief to ever climbing temperatures and cloudless blue skies.

As the weather seasons change so does the focus for many anglers all along the coast. During the winter and spring months the vast majority of ink in most fishing publications is dedicated to the pursuit of big speckled trout. Under normal circumstances those months from November thru March or April will produce the lion's share of bragging sized trout so it only stands to reason that all the attention is focused on that subject and species. As the calendar and seasons both switch the focus now turns towards the "second class citizen" of the salt, the redfish.

I have no problem professing my affinity for the redfish because I truly believe they have more to offer than just about any other fish that roams the Texas saltwater. I love chasing trout, don't get that confused or twisted. A big speckled trout has a certain feel to it that is difficult to describe, perhaps because they are rare and highly coveted. A solid redfish, not even a giant bull or anything like that, on the other hand is a sensory overload that is very often under appreciated until it runs off with about half the line on your reel just to show you it can. Redfish deserve a little more respect in my estimation because of what they bring to the table so to speak. Perhaps my "man crush" on the redfish comes from the fact that unlike speckled trout you can watch redfish do "redfish things" and that is a treat for any angler. Seeing these fish cruise around in shallow water, forage for food, swim in schools, lay around and be lethargic, or just plain disappear in broad daylight is absolutely mesmerizing to me. Learning to read their body language and adjusting to their variables is a visual puzzle that once it's solved provides endless enjoyment for all to partake in. It's truly such a feeling to watch these fish, figure out what they want, and then see them do exactly what you had hoped they would.

On the other hand redfish can frustrate you to the point where even a cold beer or good whiskey can't soothe the sting. I have had days where the redfish have just completely refused to cooperate in the slightest which in turn has caused me to question my sanity all in one fell swoop. Imagine if you will making countless perfect casts and watching fish after fish swim up to the bait as if they may inhale the offering only to inspect the bait and turn away in such a rush that they leave a hole in the water it would take 3 minutes to fill back up. Some days it doesn't matter what you do they just refuse to cooperate. On days that the redfish don't want to play all you can do is learn from the experience, put a band aid on your pride, and get after them again because they may change their attitude over night and eat anything you throw at them on the next day out. This process is what keeps many redfish enthusiasts coming back for more.