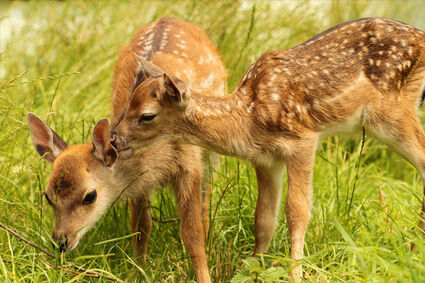 AUSTIN- During the pandemic, Texans headed back to nature in record numbers, with more people visiting state parks, hunting, fishing, and boating than ever before. A new congressional proposal aims to tap that exploding interest by investing more than $50 million per year in Texas for wildlife recovery and related public education and recreation, a move expected to boost the state's already booming nature-based economy into overdrive.

The bipartisan Recovering America's Wildlife Act, H.R.2773, would provide $1.4 billion to state and tribal wildlife conservation initiatives to support at-risk wildlife populations and their habitats. The funding would come from existing revenues with no new taxes.

If passed, this legislation would send grant funds flowing across Texas to nonprofit organizations, nature centers, universities, landowners, and many others for projects to conserve vulnerable wildlife before they become endangered.  Species like the much-loved Texas horned lizard, our state fish the Guadalupe bass, and many songbirds and coastal birds are among the many wildlife that would benefit. This funding will also help recover species that are already endangered, such as sea turtles and the whooping crane. The additional resources are urgently needed to aid fish and wildlife populations under increasing pressure from habitat loss, invasive species, emerging diseases, and extreme weather events in Texas and throughout the country.

According to the Outdoor Industry Association, the Texas outdoor recreation economy contributes to 327,000 jobs, generates $14.4 billion in salaries and wages per year, and $3.5 billion in state and local tax revenue.  For example, nature tourism is huge in Texas, and people travel from all over the world to see iconic landscapes and catch a glimpse of unique wildlife. Around 4.4 million wildlife watchers in Texas generate $1.82 billion in retail sales and support 146,000 jobs. Research surveys conducted in 2011 and 2013 found that about 2.2 million people fish in Texas annually, and their spending amounts to $2.01 billion in retail sales and contributes to 29,800 jobs.

"The litany of ways natural resources bolster the Texas economy and improve our quality of life is seemingly endless," said Carter Smith, Texas Parks and Wildlife Department executive director. "Studies show property values can increase up to 20 percent when adjacent to natural areas. Natural buffers make coasts and communities more resilient to intense storms and flood events, thereby protecting our citizens and saving billions of dollars in recovery costs.  Well-managed and restored habitats provide clean water, clean air, and healthy rivers, rangelands, and bays and estuaries that benefit both wildlife and people's enjoyment of the outdoors. While it would do much to protect fish and wildlife that need it most, the Recovering America's Wildlife Act would also mean a long-term investment in the public health and well-being of all Texans, as well as stewardship of our home ground."

Unfortunately, many fish and wildlife species on which the outdoor recreation industry depends are declining. For example, in a 2019 study that gained worldwide attention, researchers estimated that North America has lost close to three billion breeding birds since 1970. Many of the bird groups mentioned in the report-such as migratory songbirds and grassland birds-depend on Texas natural areas, working lands, coastal habitat, and city spaces-either during migration, or as year-round residents. This loss of birds is a blow to our natural heritage, the enjoyment of future generations, and critical ecosystem services such as flood control, pest control, and pollination.

Birds are also essential to our vibrant nature tourism economy. There are 2.2 million birders in Texas, and people "flock" from all over the world to bird across the state. In the Lower Rio Grande Valley-a popular birding hot-spot-a 2011 study from Texas A&M estimates the direct economic contribution from nature tourism led to a total county-level economic output of $463 million and 6,613 full and part time jobs annually. Passage of H.R. 2773 would provide the funding needed to greatly expand habitat restoration on public and private lands, which in turn will support bird life and critical nesting habitat and help reverse course for declining bird species. Bird-watching infrastructure could also be boosted through new wildlife-viewing platforms and nature trails. RAWA funding could expand marketing and education for programs like Bird City Texas and the Great Texas Wildlife Trails, to further mitigate some of the threats that birds face in urban areas, such as window collisions. It would also benefit more local communities through bird tourism.

National estimates indicate that passage of Recovering America's Wildlife Act would create 23,800 to 33,600 jobs and add $3.36 billion of economic output, leading to a net positive gain of $1.96 billion annually to the U.S. GDP. In Texas cities and counties large and small, the funding would fuel natural investments in things like coastal artificial reefs, oyster bed restoration, habitat enhancement for clean air and water, urban ecology centers, and getting Texas children outside. It would create thousands of new "shovel-ready" jobs for wildlife management, tree planting, river restoration, and outdoor recreation projects and reap benefits tenfold.

To cite one more example, the conservation of Guadalupe bass-our state fish of Texas-is about helping the entire river systems where the fish lives, including the people who live along its banks, and all those who love to come swim, wade, fish, float or paddle. On the South Llano, the Guadalupe bass is the centerpiece of a broad effort involving local communities, riverside landowners, nonprofits and universities, all focused on improving the health of the entire watershed. Fisheries biologists say, if RAWA passes, we could restore thousands of acres of spring, stream and river habitats and directly benefit water quality for human use while helping Guadalupe bass and many other aquatic creatures. Recovering America's Wildlife Act funds may also be used to create more paddling trails to give kayakers and canoers safe places to access rivers including signs and educational kiosks sharing information about  the Guadalupe bass and other aquatic life.

The Recovering America's Wildlife Act is strongly supported by the Texas Alliance for America's Fish and Wildlife, a statewide coalition of more than 165 diverse organizations and businesses. See the alliance website for information about this historic legislation on how to help.