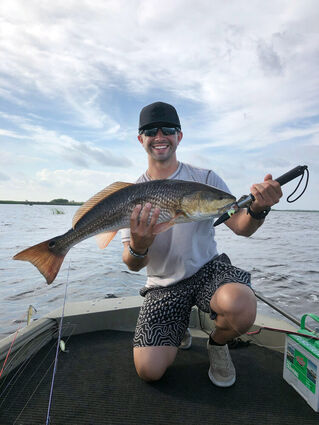 It’s a familiar scene that is played out all along the gulf coast from Texas to Florida, anglers armed with light tackle weapons probe the shallow shorelines for the bullies of the marsh. The whole encounter is a sensory overload from the get go, it is always visually stimulating to see cruising redfish roam the banks and wreak havoc like only they can. Your ears are often treated to the sounds of vicious strikes as these heavyweights flex their muscles on mullet or crabs with equal zest. Yes, it is a moment like no other as the gap between angler and fish is narrowed in an effort to escalate one of fishing’s best confrontations.

The whole event can take place in a matter of seconds or it may take several minutes to gain the proper advantage needed to make a well placed cast. The still days that are so prevalent during the summer months offer up some of the best opportunities for Sabine lake fishermen to sight fish for redfish. Sight fishing refers to the art of actually seeing the fish before a cast is made instead of just fan casting or blind casting in hopes that a fish will find you instead. The off colored water that we are so used to here on Sabine lake usually clears up in the summer months enough to actually practice this method of fishing. When water clarity is an issue anglers usually target the familiar “V” shaped wakes associated with cruising reds, by casting just ahead of these wakes an angler can put themselves in position for one of the best shows on the water as their lure of choice is demolished in a flash of red.

Anglers can take redfish in a variety of ways with many different lures, spoons or topwaters are high on the list for conventional anglers while other folks like to offer up a shad or finger mullet on a split shot rig. Perhaps the most exciting way to tangle with these broad shouldered fish is to cast a popping fly or crab imitation and hang on. Flyfishing for redfish is an adrenaline producing rush like you may have never experienced, more often than not once a redfish is hooked most anglers don’t know who has who as their line keeps leaving off the reel at breakneck speed. The sheer power of the fish can really be appreciated with fly gear, the whole experience is magnified to the point where it becomes an addiction of sorts.

Chasing these fish with either style of gear has become a summer pattern that plenty of anglers including myself look forward to with great anticipation. Either near the banks looking for one red at a time or out on the smooth open water of the lake looking for a school of  50 or so. Keep your eyes open and listen carefully because in the coming weeks anglers on Sabine lake will be in store for great fishing courtesy of the marvelous redfish.