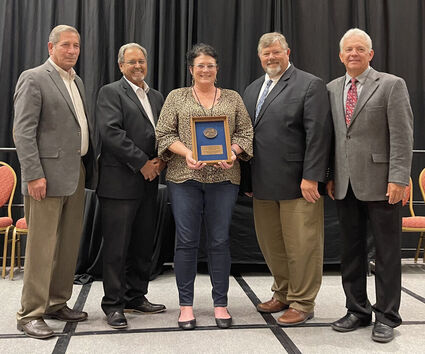 Orange County Airport Manager Missy Pillsbury, center, was named the Texas General Aviation Airport Manager of The Year at last week’s Texas Aviation Conference last week in San Marcos. Pillsbury, a longtime tax office employee, has been Airport Manager since 2014 and took over as full reins of the operation in 2018. The state has more than 400 general aviation airports but Pillsbury’s nomination, sent in by the airport’s base pilots, flew to the top of the heap. “Orange County is a good little airport but until Missy came it had no life ... Her passions for the airport, its pilots/aircraft owners, instructors and visitors have brought this facility back to life,” said the nominating letter.