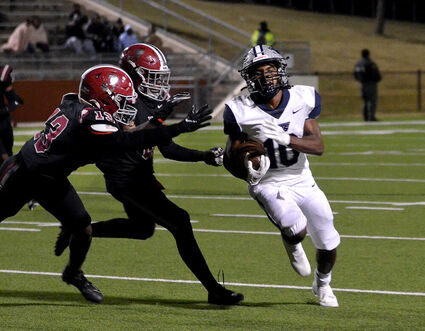 Using his blockers and his speed, Mustang Dakarion Judge hits the corner and scores six for the Mustangs.

WEST ORANGE-STARK (10-1) over BELLVILLE (12-0) 6 p.m. Friday at Randall Reed Stadium in New Caney-This very well could have been a battle of the unbeatens if inclement weather hadn't interrupted the Mustangs' season opener in the third quarter at Nederland with WO-S behind 13-7. If the 'Stangs can upset this foe Friday night, their reward will be facing another undefeated team-either China Spring (12-0) or Carthage (11-0) in the regional finals.

EL CAMPO (11-1) over LITTLE CYPRESS-MAURICEVILLE (10-2) 6 p.m. Friday at Woodcrest Bank Stadium in Shenandoah-The Battlin' Bears seem to play much better when they are the underdogs, so maybe this game was set up with a big upset in mind. LC-M must continue to play they way they have for the past two months.

NEWTON (10-1) over WASCOM (11-1) 6 p.m. Friday at Dragon Stadium in Round Rock-The only thing that kept the Eagles from being undefeated was the West Orange-Stark Mustangs at the beginning of the season. Since then, Newton has taken care of their opponents big-time, and that trend should continue Friday night.

TEXARKANA TEXAS HIGH (11-0) over PORT NECHES-GROVES (8-4) 6 p.m. Friday at Turpin Stadium at Northwestern State University Stadium in Natchitoches, La.-The Indians definitely have their backs against the wall as they play one of the best Class 5A-II teams in the state. 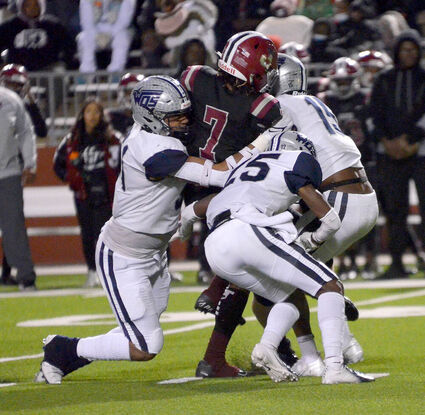 Jasper's Tylee Adams has nowhere to go as the Mustang defense led by Bryson Jordan, Nicholas Crosson and Jailen Brown meet him before the line of scrimmage.Adams was held to 6 yards on 8 carries.