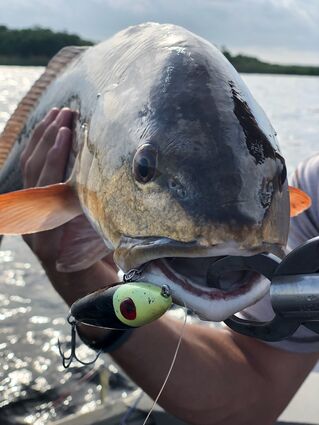 Some of the best days I have ever had as a fisherman happened in the Sabine River so to say I hold a fondness for that place would be an understatement. I have seen all manner of fish caught in those waters from bream to sharks and everything in between. I enjoy seeing other fishermen find success in the deep water and I really like it when it happens in the winter. For years we had such a solid program starting in the summer months and going all the way to January at times, depending on rain and runoff from Toledo Bend. It was nothing to fill your livewell with shad, tie up a Carolina rig, find a break or depth change, and start catching fish. For a guide it was heaven because you burned almost no gas and seemed to always catch fish. That was the perfect program until hurricane Ike showed up and turned our world upside down, literally and figuratively.

In the years after Ike we went through a huge learning process due to so many things changing along the river from the huge run off. The striped bass we had patterned up so well absolutely disappeared, I haven't seen one in years. At times we might have a flurry where some fish would get in some of the more predictable places but those times were few and far between. Stack up a few more storms and some untimely releases from Toledo Bend and its no wonder things are so different.

At the moment we actually having a little flashback to the "good old days" as a nice pattern has developed in the last few weeks. The folks who decided to fish, rather than hunt, have been rewarded with some solid action along the river and intracoastal canal. The standard pattern involves lots of casting and covering water but it's certainly worth the effort. Crankbaits like the classic Rat-L-Trap or Hoginar along with smaller square billed plugs and swimbaits are producing some really nice fish, especially redfish. I have had reports of both trout and redfish well up the Sabine River beyond the state line bridge all the way down to both Adam's and Cow Bayou into Sabine Lake. The water condition is still excellent along most of the river and the lake so you have plenty of areas to choose from. Obviously tide changes are the key to better fishing and quality electronics will go a long towards success as well. Once you get bit fish the area thoroughly because there are usually more fish bunched up. This pattern is well worth a look if you are willing to put in a little time.

Texas duck hunters will reopen their duck season as the second split will get underway on Saturday. The numbers of ducks has increased somewhat over the last week or so but is still down overall. It appears as if a little more cold weather will show up for the opener and that will be a welcome break from the above average temperatures we have been dealing with so far. Farther up the flyway the temps finally resemble winter and that should at least move some ducks and geese towards the south but we still need all the help we can get. Hopefully the second split will take off and produce some better hunts for those that struggled during the first half of the season.