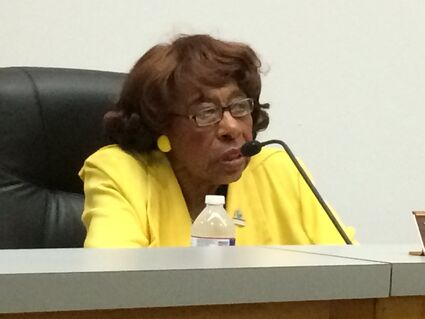 A funeral service will be held at Salem United Methodist Church in Orange at 11 a.m. Saturday, Feb. 5.

She served as Mayor of Orange from 1997 through 2000. Nearly two decades after being elected mayor, she rejoined city government as a member of the city council.

Bellfield lived an incredible life that included a 1965 civil rights march over the Edmund Pettis Bridge alongside future Congressman John Lewis and an upbringing among Orange's richest families.

Born in Pittsburgh, Pennsylvania, and raised in Louisiana, her father was a lumberjack and her mother was housekeeper for owners of a rice mill.

Her family moved to Orange, where Bellfield's mother worked for some of the city's top families and Essie grew up under those families' roofs.

The future mayor headed the housekeeping department for Orange's hospital for years.

And she loved traveling.

"I've been all over the world except Russia," Bellfield said in an interview a few years ago.

She was well known by state and federal politicians during and after her time as mayor and council member and was close with Texas Gov. Ann Richards.

"She'd get birthday cards from presidents. She and Ann Richards were especially close," said Richard Spector, a close friend.

Bellfield said she accompanied James Rogers, Roberts, Velma Jeter and Fred Early, all from Orange, to join 600 others in the March 1965 voting-rights march, which began in downtown Selma and ended in blood and tear gas clouds less than half a mile later.

Two weeks later, after a federal judge overturned an order by Alabama Gov. George Wallace that had declared the march illegal, Lewis and Martin Luther King, Jr., were accompanied by about 3,000 marchers when they finished the 54-mile march to the state capital in Montgomery.

Bellfield said she met Lewis several times on her trips to Washington, D.C., either with the NAACP or on behalf of the city of Orange or one of her other organizations.

"We'd get on the bus and ride to those marches," she said. "We marched and marched."