By Capt. Chuck Uzzle
For the Recored 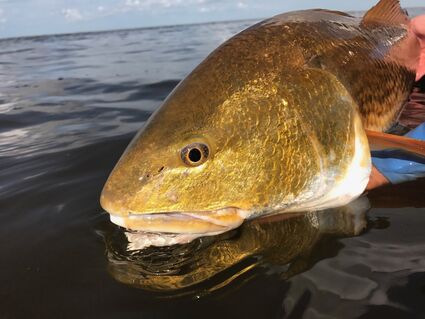 Redfish are a sure fire bet to cure the winter version of cabin fever.

If you happen to be one of those people who live their life according to the weatherman you have had a great month so far, especially for February. All things considered the temperatures have been reasonably mild except for a few frosty mornings and we have been noticeably dry for weeks now. Anyone who has spent even a little time on Sabine knows that rain and run off from Toledo Bend are the arch nemesis to the local fishing community. Most of the time the water clarity in February tends to be the color of brown paper sack or maybe even a stale yoo-hoo but currently that's not the case. Everything from the north end to the beach has some great clarity and color which is a huge bonus for us all as we roll full steam ahead into the spring.

The top-notch weather will no doubt spur on many cases of "cabin fever" for those who have been waiting anxiously for warmer weather and better fishing conditions. With Toledo Bend and Sam Rayburn both being approximately 4 feet below pool level, and getting lower by the day, the potential for big run off from rain that will inevitably show up decreases with each passing day. There is just some absolutely gorgeous water on the south end of both Sabine and Calcasieu right now and it gets better with each tide change. I am cautiously optimistic as to how the fishing shapes for the coming days and weeks, but I must admit that I am looking forward to the great potential. Every day we get more saltwater into our bays is a plus as these surges of water pump life into all areas of the bay and sets the table for what may come. My fingers are crossed in the hopes that we not only begin to see some bigger trout show up but also that those trout are released to help re-populate our local waters.

Right now, the redfish continue pick up the slack as they become relatively predictable in several areas of Sabine. It's hard to go wrong right now by running shorelines with a swimbait or a 4" plastic under a cork. Pay careful attention, as always, to the tide changes and target the outgoing if possible while staying near the marsh drains and cuts. The redfish will get plenty active and should not be hard to find with a little effort. Speckled trout are showing up in the channel and deeper water around the south end but don't be afraid to give the north end a chance either. I would be willing to bet you a steak dinner there are going to be some nice fish caught this spring if these conditions continue. Look for places like Lighthouse Cove and the flats along the ship channel to receive the most attention from anglers as those places have been proven producers over the years. I can also bet you that the folks catching those fish will be as quiet as church mice when it happens because they have worked to find those fish and will protect that area like it was their own.

If it's still too cold for you to think about getting out on the water another option is to catch a fishing or boat show. There are several all along the coast this month with the "grand daddy" , The Houston Fishing Show, taking place in late March. Look for some great deals to be had on smaller more economical boats and kayaks as both businesses and consumers try to deal with the skyrocketing inflation brought on by President Biden. The New York Post just reported that the Consumer Price Index inflation just hit 7.5% for the year ending in January, the highest jump since 1982. Gasoline prices went up by 40% so you can bet there will be more folks looking for a kayak instead of emptying their wallet at the pump on an outboard. The only numbers the current administration has managed to lower is their approval rating, which is now coincidentally well below 40%, imagine that.

If you are a fisherman you can hope for a few things going forward, that the weather pattern holds as long as possible, that gas prices take a turn for the better, and that we all get a few more days off to fish.