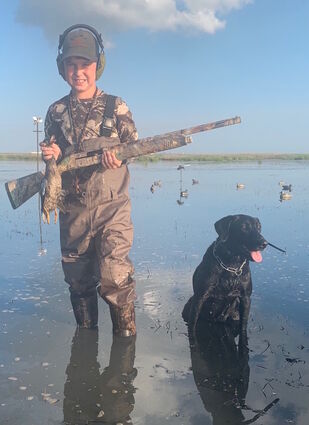 A shotgun with the right fit is a must for young hunters like Alexander Burkart.

Texas hunters do everything big and that includes purchasing their firearms. Now the bigger is better theory has some merit but not when it comes to smaller hunters such as women or children. Picture this, the moment all hunters prepare for is at hand, the first big buck or giant Canada goose has come in to range and it's time to take the shot. The trigger is pulled and a shot rings out followed closely by a howl of agony from the shooter and a big "oh no" from their hunting companion. An improperly fitted rifle or shotgun will do more damage to a novice hunter than just about anything. Guns that are too big or heavy will cause any hunter to compromise their form or shooting ability to compensate for the recoil or pain they feel when they fire the weapon. Flinching before the trigger is pulled is the most common result of a bad recoil experience and that's not good by any stretch of the imagination one way to prevent this is to fit the right gun to each hunter so that they can be comfortable each time they shoot. Over zealous dads are the worst, "he'll grow into this one" is not what you want to say when buying a gun. These guys try to  make the person fit the gun instead of the other way around. What do you think happens when your wife bruises her shoulder or breaks her nose on a scope when she shoots, they don't shoot any more. Prospective gun buyers have a world of different firearms to choose from and with a little bit of research and some patience you can find the right gun for the job.

For purposes of comparison let's look at shotguns, particularly ones for smaller hunters. Every major brand of gun manufacturer has a youth model shotgun and they come in a variety from .410 to 12 gauge. One very often overlooked factor regarding these youth model shotguns is weight, some of these weigh in almost the same as the regular models. If you compare the weights of the guns with the size of the shooter you can see that at some point the two become disproportionate. For instance a 90 pound boy shooting a 7.5 pound shotgun is the same as a 200 pound man toting a 17 pound gun, not the best ratio to say the least. Think about dragging a 17 pound shotgun the next time you are up to your thighs in mud while wading to your duck blind and you can now appreciate how a younger hunter feels about "growing into" their shotgun.

The three groups that youth model shotguns fall into are single shot, pump action, and semi automatic. By far the safest of the three is the single shot where you cock the hammer and pull the trigger, no complicated moves and few moving parts. The drawback to the single shot is the felt recoil, some of those single shot shotguns can pack a wallop so be sure to take that into consideration. The pump shotgun is probably the most popular model for smaller hunters and the youth model Remington 870 is the standard. Other companies like Mossberg also make really nice pump shotguns for smaller shooters, they also have interchangeable stocks so once the young hunter does actually grow they can change out the small stock for a standard size model. The felt recoil is a still a consideration with the pump models but they are better than the straight single shot. Also the pump models will handle more shells when the time comes that your young hunter has proven they can handle the gun and may want to shoot more than just once.

Now on the high end of the shotgun spectrum comes the semi automatic models, yes they are more expensive but they also offer some added benefits. The felt recoil on the semi auto is much less thanks to the gas being channeled into service as it helps to eject the spent shell and load the next round. The semi auto does require more upkeep and can be a bit finicky when not cleaned properly but that goes without saying on most any model. Easily one of the best overall models for a young shooter comes from Charles Daly; the youth model 20 gauge weighs in at just more than 5 pounds and does everything one could ask from a semi auto. The youth model comes in full camo or black synthetic with all three screw in chokes and is chambered in 3 inch so heavy waterfowl loads are not a problem. The light weight makes the gun easy for smaller hunters to swing and that in turns makes

for much better shots.

There is one other option that comes to mind for smaller hunters and that's to have a regular sized shotgun cut down to fit by a gun smith. Custom fitting is always an option but it can get expensive as well. If you do have a gun cut down be sure to go ahead and purchase another full sized stock so it can be replaced later, sometimes models go out of style and parts are hard to come by so get the

extra stock when you purchase the gun.

Keep a few of these things in mind when you decide to get a weapon for your child or spouse because it may just be a determining factor that either keeps them hunting with you or finding a new hobby.