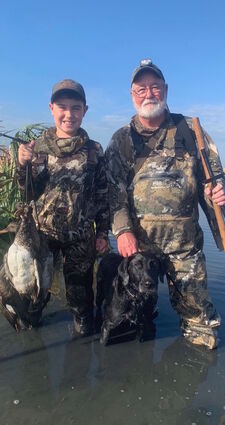 Alexander Burkart and his grandfather Skeeter Graves had a fantastic hunt during the youth only weekend in Louisiana.

Saturday morning will officially usher in the 2022-2023 waterfowl season for all our local hunters and expectations run the gamut from cautiously optimistic to gung ho. Texas duck and goose hunters cranked up last weekend and the initial reports were very good.. Many local marshes that are historically proven early season producers had mixed reviews after the storms rolled through but they made up for it on Sunday. High water during the late summer stunted vegetation growth in many areas so the food sources have somewhat changed and the birds have obviously followed so there were some really good shoots around quality vegetation and food sources. Several great reports also came from public lands where gadwall, pintails, and plenty of teal made up the majority of the straps. A decent amount of widgeon were also taken by several hunters I spoke with as well.

Local hunters who cross the Sabine River and chase ducks and geese in Louisiana will get their first opportunity as the season opens in the Coastal Zone on Saturday morning. Many hunters running the marshes reported a good influx of birds last weekend during the Youth Only hunts. Saturday's youth results were much solid and even better on Sunday's according to the reports I received as it seemed overnight the numbers of birds in area took a big jump. These small fronts we have been getting are certainly helping bolster the number of ducks that are already here. Everything right now points to a big push of birds as a very nice cold front heads into our area this weekend. The current forecast looks to be bringing helpful cold weather so prospects for a great weekend are high..

Farther down the Texas coast the opening weekend brought better reports overall as quick limits were the norm in areas around Matagorda, El Campo, and Garwood. Solid populations of speckled bellied geese were bonus birds for duck hunters fortunate enough to have combo shoots near agricultural fields. The concentrations of birds were a bit more predictable down there for those who had plenty of water. Pumping water onto prime locations is big business and in years past the opportunity to have "duck water" was at a premium. This year the higher than normal summer rainfall helped out the farmers and hunters alike when it came time to pump and many outfitters reaped huge benefits. Some of the prime areas in that part of the state have not looked this good at this time of the year in quite some time. The opening weekend was basically just an extension of the great teal season for hunters in that part of the state. In fact the blue wings and green wings made up a good bit of the numbers of ducks taken for many hunters. Perhaps the biggest bonus during the opener was the amount of pintails that have already shown up. Several hunters reported taking their pintails early and then getting the opportunity to just watch a few flocks work their decoys.

Going forward for waterfowlers the biggest concern will be weather and that always seems to be the case. It's been a tough stretch for the last several seasons and that trend appears to be improving, in fact the Farmer's Almanac is actually calling for a cold wet winter and that's exactly what we want. Regardless of the forecast most waterfowlers will continue to battle through the conditions in one way or another. Many hunters will go as hard as they can locally and then get on the road if necessary to seek out other opportunities. Hopefully we can get some cooperation from both the weather and the birds because local hunters are certainly due for a break.