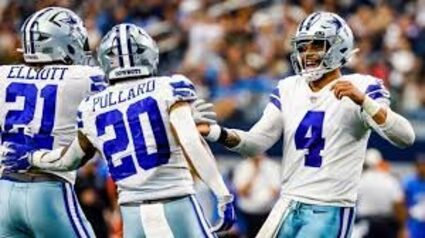 As the Dallas Cowboys surge and the NFC East Division-leading Philadelphia Eagles win by the skin of their teeth, it appears that a Christmas Eve showdown between the two teams at Jerry Jones’ Palace looks like it should take place.

The Cowboys seem to have a thing for teams with only one loss (although I expect the Eagles to have more than just one loss by then) as they completely embarrassed Minnesota 40-3 Sunday afternoon in front of a sellout crowd of Vikings fans led by Dallas’ twin running backs Tony Pollard and Ezekiel Elliott and quarterback Dak Prescott, who played flawlessly.

The Cowboys scored on their first seven possessions while the once-Doomsday Defense held the 8-1 Vikings to 183 total yards, their fewest since 2015. It was their biggest road victory in Cowboys franchise history as Minnesota dropped to 8-2.

Pollard led the onslaught with two touchdown catches and a career-high 189 yards from scrimmage, Elliott rushed for two scores and Prescott completed 22 of 25 passes for 276 yards, zero interceptions and the two Pollard touchdown catches.

In the meantime, former Channelview High School star Jalen Hurts needed to take matters into his own hands for the Eagles and scored on an eight-yard run with 1:20 remaining to edge past the hapless Indianapolis Colts 17-16 and stay two games ahead of Dallas in the East Division. And if there’s one thing Philadelphia Eagles fans despise, it’s the Dallas Cowboys.

And it started a long time ago when the Cowboys really were America’s Team and Head Coach Tom Landry was placing Super Bowl rings on every finger of his right hand.

Last month when the Eagles hosted Dallas and won 26-17 it was officially “Dallas Week” in Philadelphia and it was time to get your hate on.

The hate for Dallas lately has been replaced by the frustration of not winning a Super Bowl after getting so close in the Andy Reid era, according to a recent article in the Bleacher Report.

“But what is it about that team (Dallas) that incites Eagles fans so much? Today’s Eagles fans probably don’t know why they hate them—they just do. They learned from their fathers, uncles, brothers, grandfathers, friends, friends’ relatives etc.—that if you are an Eagles fan, one of the requirements is to hate the Dallas Cowboys,” the article points out.

The hate began around 1967 when the Cowboys won 21 out 23 games against the Eagles and went to five Super Bowls.

“The fact that they were constantly beating us, were a division rival and were getting all kinds of national acclaim must have made Eagles fans of that era want to go berserk. The Eagles have been around since 1933 and had three NFL Championships by 1960 when the Cowboys came into the league. After that, winning went into hibernation,” the article confesses.

In the mid-1980’s when Buddy Ryan was the Eagles head coach the rivalry really heated up. There were Bounty Bowls I and II, Buddy’s Revenge, Jimmy Johnson getting pelted with snowballs, Michael Irvin’s career-ending injury, Terrell Owens’ Return and the 2009 back-to-back drubbings in Dallas.

“However, at times now it seems the rivalry is losing a little steam. Have Eagles fans gone soft on the Dallas hatred? If so, we need to make a list of reminders why the hatred should live on in the hearts of Eagles fans.

“Why should we hate Dallas” Let’s count the ways: 1. Their Arrogant Fans 2. The National Media 3. Their Owner Jerry Jones 4. Their Front-Running Followers 5. Their New Stadium 6. America’s Team? 7. ‘How ‘Bout Dem Cowboys?!”

Perhaps their favorite song should be “Mommas, Don’t Let Your Kids Grow Up To Be Cowboys”.

KWICKIES…The 1-8-1 Houston Texans are the only NFL team without a win at home. Back on Sept. 11 the Houston Chronicle sports staff predicted the team would win four games—with the Las Vegas Boys setting their over/under at 4 ½ victories. It looks like those folks who bet the under will have some extra change in their pockets in January. Five wins are not possible to attain, even with future victories over the Cleveland Browns (Dec. 4), Jacksonville (Jan. 1) and Indianapolis (Jan. 8).

Georgia, Ohio State, Michigan and TCU are still the top four teams in this week’s Associated Press Top 25 College Football Poll with Southern Cal up two marks to No. 5, LSU still No. 6, Clemson up two to No. 7, Alabama remaining at No. 8, Tennessee dropping four places to No. 9 and Oregon up two spots to No. 10. Tulane jumped up two spots to No. 19 and the Texas Longhorns rejoined the poll at No. 24.

Kansas City’s three-point win over the LA Chargers Sunday night marked the Chiefs’ fifth-straight win after trailing at the start of the fourth quarter. On the other hand, it was the Chargers third straight loss after leading in the fourth period.

Golfing star Rory McIlroy, who went another year without winning a major tournament, finished Sunday as Europe’s top-ranked golfer for the fourth time and became only the second player to win season titles on the PGA Tour and European tour.

After Budweiser consented to a $75 million sponsorship with FIFA for the soccer World Cup Tournament that begins this week, hosting country Qatar removed sales points of beer in their new stadium just completed for the huge event. I think Bud needs to remove their money.

The Houston Astros did not offer a contract to often-injured reliever Josh James but tendered contracts to the eight other arbitration-eligible players—outfielder Kyle Tucker, utility man Mauricio Dubon, starters Framber Valdez, Cristian Javier and Jose Urquidy and relievers Ryne Stanek, Blake Taylor and Phil Maton. James, who did not appear in a single major league game in 2022, was estimated to receive $800,000 in the salary arbitration process.

JUST BETWEEN US…This is the time of the year when West Orange-Stark football fans would enjoy eating and shopping at the many stores and malls in the Houston area before watching their Mustangs play in the third or fourth round of the state football playoffs. Thanks to certain folks sitting in their ivory towers in the Administration Building, those days are gone—perhaps forever!!!