Lady Cardinals should rebound under Sterling 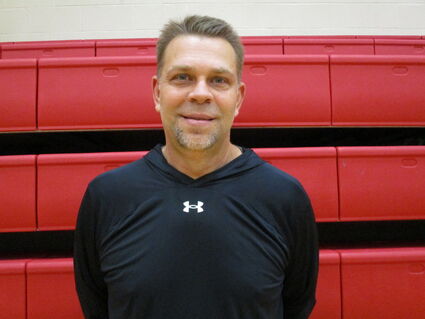 Sterling coached the Bridge City boys for three years when the Cardinals had some success in basketball. He coached four years at Nederland before making a decision to return to Bridge City. "The administration here I think is in place that really wants to see athletics succeed that's one of the reasons I came back. The other reason is obviously I have some daughters in this school district, they are coming through the basketball program, and I want to be a part of their experience here," Sterling informed.

Last season the Lady Cardinals did not have the kind of season they wanted. Sterling replied, "I told our kids this is a new day, it's a new time we're not going to look in the past and see about how things were in the past. We're going to build on today and look to the future. I'm excited about what can be if we continue to work and really pull together. My first year really is about changing the culture in the basketball program because we want to create a championship culture, how we do stuff, what our standards are, and how we go about our everyday business of working."

There are some building blocks which Sterling can start that successful basketball program with this season. Senior Morgan Louvier has started multiple years on the Bridge City girls' basketball team. She is expected to be a leader for the Lady Cardinals.

Four other ladies have varsity experience. Nicole Sasser, Whitney Cunningham, Kira Middleton are all sophomores with one year already on the varsity. Junior Rylynn Thornton is also back for the Lady Cardinals.

Sterling said he will lean on them for leadership too because they have been through the grind of a season. All the girls even the five with varsity experience will be learning a new system under Coach Sterling.

Thornton will start the season at the post position. Louvier is the point guard. Cunningham will be on the wing. "We have a variety of players with skill sets that are coming back. We're just trying to mesh everyone together, get them in the right position to be successful, and to show them what we emphasize is important to our culture," Sterling explained.

The freshman class is very talented for the Bridge City Lady Cardinals. The strength of those freshman girls is their depth. Five freshman Lady Cardinals will be on the varsity who will contribute to the team according to Sterling. "They all bring something kind of unique to our team, but we're excited about them as a whole group and what they can bring to our varsity mixed with our older kids," Sterling evaluated.

Makenna Knight is a top athlete good at multiple sports and will show her skill on the basketball court for the Lady Cardinals. Kaylee Britten is an experienced basketball player though just a freshman. Cambree LaComb comes off the Bridge City varsity volleyball team to contribute to the basketball team. Sterling commented, "They're very good athletes in general. They've been successful in other sports so they kind of know what it takes to win."

Another freshman is Kaley Nelson who will be seeing playing time at the post. Sterling praised her saying Nelson is very talented and has a bright future in basketball. Kennedy Campbell is the fifth freshman who plays the wing, loves basketball, has some height, and could be an important outside shooter for the Lady Cardinals.

After taking his new job as the girls' basketball coach at Bridge City Sterling expected it would take some time to turn the program around, it would not be an overnight prospect to build the quality program he wants. He wants to be patient but is pleased to report the Lady Cardinals are working hard.

In their early games the Bridge City Lady Cardinals were 2-1 with a 19-point win over Kirbyville that beat the Lady Cardinals last season and a decisive win against Sabine Pass. The lone loss was to the Class 5A Nederland Lady Bulldogs by five points a game in which two Lady Cardinals fouled out.

The outstanding success of the Bridge City volleyball team this year meant that the girls from that team only had two practices with the basketball team before they played in the game with Sabine Pass the week before the Thanksgiving break. "We're excited about having a whole group now and the more practice and playing time we get together I think they'll continue to grow and get better. Obviously, our goal is to be playing our best basketball once district hits," Sterling emphasized.

Coach Sterling expects his Lady Cardinals to contend with every district opponent. Sterling promised, "I expect our team to pressure the basketball. I've told the girls we want people to want to come see us play. We want to play a style of basketball that people want to watch. We're going to pressure the basketball, we're going to try to play fast. People want to come see girls that play hard, that dive on the floor, take charges, that play fast, so that's what we want to try to practice and immolate each day."

The district starts for the Lady Cardinals on Friday, December 9, at Bridge City against the Jasper Lady Bulldogs. The district is expected to be very competitive this season.

Sterling is using his Lady Cardinals to catch him up on the various district opponents. "I know Silsbee has got a lot of very talented players back and a strong program in general. The same with LCM, they're on a good streak right now with a lot of talent coming through and are very well coached. I know Jasper has won their district two of the last three years in the district they are coming from. Lumberton's always a perennial playoff team and they have a lot of tradition in girls' basketball. Each night is a tough opponent. It's my job to get the Lady Cardinals ready to play so we play tough in practice so when we get to the game it's the same level of play. I want to get to the point where our girls want to compete in those big games. That's what I'm looking for win or lose they're not scared, they want the challenge, they want to compete against the best teams, and see where they stand. We look forward to the challenge," Sterling concluded.