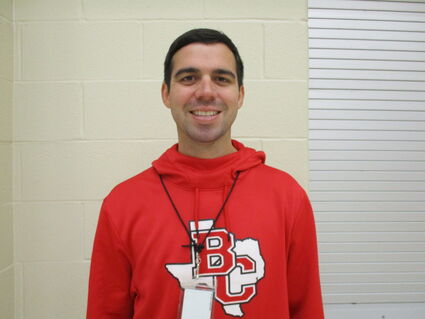 A young Bridge City basketball team took its lumps last season. The Cardinals are more mature now and look to be a playoff contender this season.

Last year was a rebuilding campaign for Bridge City after a successful season two years ago. The Cardinals lost five seniors going into last season and played only two juniors, multiple sophomores, and a couple freshmen on the varsity.

Coach Randall Robertson analyzed the uphill battle his Cardinals had with a lack of varsity experience last year. "We were very young and inexperienced, but the Cardinals learned a lot about themselves and it's helped them mature for this season," Robertson replied.

Nine players return from last season for Bridge City. Robertson evaluated, "When you return nine out of ten guys you've got to be a little better especially when they all have a varsity season under their belts. We anticipate being a lot more experienced and mature this year than we were last year."

The returning Cardinals rotated from being starters on occasion to role players off the bench last season so all of them have gained experience doing just about everything on the court. The key returner is senior Walker Britten at point guard and shooting guard. "He's a knock down shooter. Walker can shoot it from 30 to 40 feet however far he needs, and he also transitions into a point guard role being a good facilitator for everybody else," Robertson described.

The only other senior is Fernando Rodriguez at guard. Rodriguez has played two years on the varsity. Robertson expects Rodriguez to help out the Cardinals with his experience as a senior.

Five juniors make up half of the varsity for Bridge City. Lincoln Breaux is a power forward who will also be a trailer for the Cardinals. Breaux will be counted on to score down low and for his rebounding.

Shooting guard Aiden Gutierrez will also handle the basketball as a point guard. Gutierrez has been a starter during the summer and in the early games this season for Bridge City. Robertson said, "He's a guy that's really matured over the last year and he's finding his role."

Steve Stone is a good player off the bench. Stone is a hustler that gives the team great minutes and gives everything he's got when he is on the court.

A junior who has really stepped up and transitioned into a strong player is Aaron Torres at center. "Aaron has found his way into the starting role. He's learning to score it low, he's a good defender, and he's a great rebounder as well," Robertson praised.

The fifth junior is Jerris Brown who has recently joined the basketball team. Brown was a starter on the Bridge City football team through the early weeks of November.

Linder made second team all-district as a freshman, and Coach Robertson is looking for big minutes from him this season. Robertson expressed, "Bryce is a great defender, he takes charges, he rebounds, and he does the dirty work down low."

Carlin adds depth to the guard position for Bridge City. He sees the floor well, is a great facilitator, and makes everybody else better. Robertson commented Jagger is a really smart kid.

The only player on the Bridge City varsity who was not on it last year is Aaden Bush a freshman. Bush has already found a spot in the starting lineup for the Cardinals. "He's going to be a really good player. I think he's got potential to end up being one of the best kids to come through Bridge City ever. Aaden had a great first game for us at Huffman scoring 21 points and 8 rebounds," Robertson added.

The Cardinals have challenged themselves in the early games to improve over last season. Bridge City won the opener against the Huffman Falcons 57-56 in a nail-biter. Robertson analyzed, "The kids played great. They played together and everybody got into the scorebook. That was a total team effort overall, a great defensive game for us, and a great road win to start the season."

The first home game against the visiting Nederland Bulldogs brought Bridge City back down to earth as the Cardinals lost the contest. The loss will serve as a learning experience for Bridge City Robertson pledged.

Bridge City kept that pledge winning its next two games during the Thanksgiving break at home. The Cardinals defeated the Evadale Rebels 65-52 on Monday, November 21, never trailing in the game. Britten stayed out of foul trouble and scored a team leading 21 points. Aiden Gutierrez shot well adding 16 points.

The next day the Cardinals played the Legacy Christian Warriors in a much tighter game at the Bridge City High School gym. The Cardinals fell behind briefly but came away with a 62-58 win. Britten was again the leading scorer with 22 points. Breaux and Aaron Torres both contributed 9 points to the victory.

That opening district contest will set the stage for what will hopefully be a successful series of games for the Bridge City Cardinals. "From last spring on to the summer time to the fall we've played a lot of games, and these guys have really jelled together in order to achieve one goal which is to be in one of the top four spots to make the playoffs in our district. Like I've said our district is very good from top to bottom, but I do fully think we're just trying to take it one game at time right now and prepare ourselves in the preseason for the district. Hopefully, by the time district gets here we can take it one game at a time and get enough wins to be one of those top four teams. It's a very competitive district, but I know with the guys that we return they're capable of getting it done if we stick together and continue to play as a team," Robertson concluded.