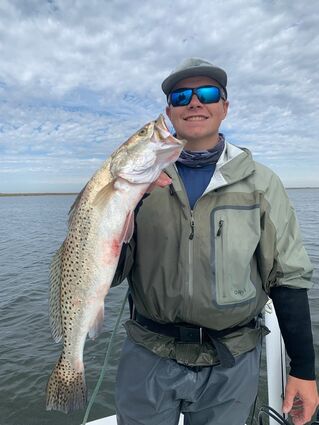 December and January, two months that for a long time were rarely associated with fishing of any kind in this area, have now become almost like any other good month to wet a hook. Techniques that were brought up from the lower coast of Texas have transformed the dismal winter months into a saltwater fisherman’s paradise. Over the last several years Sabine Lake has suffered from the effects of floods, storms, and freezes which have greatly contributed to the lack of big trout being caught. The resurgence we have seen this year has many people hoping that some of those better fish will begin to show up again.

If you are in the mood to do some fishing in the next few weeks for perhaps that fish of a lifetime, you definitely need a double helping of patience. It is no secret that lion’s share of big trout are caught by wade fishermen, this is a given in the big fish equation. The unknowns for most anglers are where to be fishing and when do they need to be there. On Sabine lake we have some areas that are really conducive to holding big fish, they all have shell in common. Areas of the lake that have either clam or oyster shell are prime places to start the hunt for a big fish. Any decent concentration of shell will be a gathering place for baitfish and a will also qualify as a good piece of fish holding structure. Small patches of shell on or near shallow flats will not only hold bait, they will also hold heat. Much like bass in the springtime, speckled trout will be more active in warmer and shallower water. During the fall and winter months big trout become sluggish and less aggressive than normal until it comes time to eat. Big trout will move up on shallow flats or shell reefs and seek out a “full

meal deal” and then retreat into deeper water until it comes time to feed again. Fishermen who can pattern movements like these major feeding periods can really

cash in on some extraordinary fishing, this is where patience plays a huge part in the program. 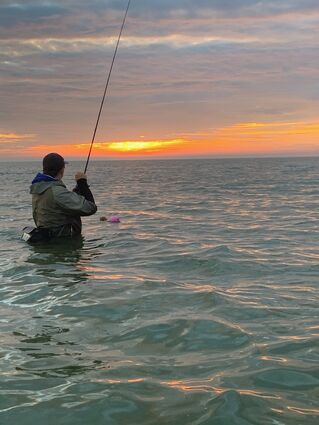 Winter fishing for big trout is a game of stamina and endurance, this is why really hard-core saltwater fishermen are referred to as “grinders”. By logging many unfulfilling hours casting big topwaters or sub surface mullet imitations an angler can begin to form a pattern. For example, if you fish in the morning for a couple of days straight and have little or no success and then change to the afternoon where you enjoy terrific fishing you have found a pattern. On good fishing days it is wise to check out all the conditions and try to duplicate them next time out. Tides, temps, and water conditions are extremely important factors to be considered, these all play big roles in successful winter fishing. Looking back at notes from past winter trips one thing that I found that was constant on successful days was the presence of moving water, incoming or outgoing tides were always helpful in catching fish while slack water conditions made it tough. It seems that if you could find day when the time between the tide changes was short that the fishing on average was better, especially when the tides were changing from outgoing to incoming. Put all these factors together with the presence of mullet or shad and you increased your shot at some super fishing.

Winter fishing is by no means easy or predictable, but the rewards are well worth the effort. This trend toward chasing trophy fish is a tough grueling exercise that has captivated many really good fishermen from all over the state. Any and all destinations along the Texas gulf coast will have their share of “grinders” out there chasing after the big one, Sabine lake has far more than her share of them right now. Hopefully the big fish will be respected enough to

be released to fight another day, only time will tell. Until the weather and the months change the winter fishing program will be the best bet in town, try it out and see what the fuss is all about.