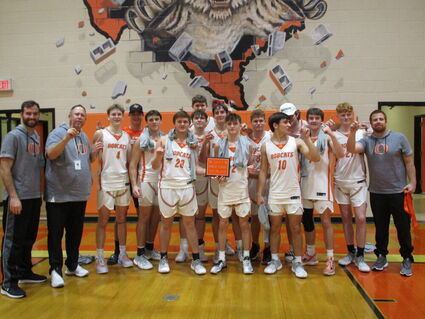 The Orangefield Bobcats won all five of their games over the weekend in the Orangefield basketball tournament. The five victories earned the Bobcats the first place trophy.

Orangefield won two games on Thursday, one on Friday, and two more on Saturday to claim the tournament championship. It was a total team victory for the Bobcats as injuries to posts Morgan Sampson and Koen Maddox limited their ability to play during the tournament.

The championship game on Saturday pitted the only two teams who were undefeated in their first four games of the tournament the Bobcats from Class 3A and the Class 4A Vidor Pirates.

The Bobcats started their route to the final game by defeating the Evadale Rebels 58-36 in their opening game on Thursday morning with Pete Ragusa leading all scorers in the game with 29 points. Later that evening Orangefield ran over the Shepherd Pirates 82-40. Three Bobcats scored in double figures led by Ragusa's 18 followed by Jaden Scales with 16 and Kane Smith scoring 11 points.

On Friday Orangefield jumped to a 24-9 first quarter advantage and won 67-45 over Legacy Christian. Ragusa led the Bobcats with 27 points and Brayden Parker tossed in 10 points. Maddox had 8 points before he hurt his ankle late in the fourth quarter which forced him to wear a brace on it and kept him on the bench the last two games.

The next opponent for Orangefield was the Jasper Bulldogs on Saturday who had won two of their first three games. With both Maddox and Sampson out of action the Bobcats called on Cameron Dischler to be their big guy in the middle.

Dischler responded to the role by leading the Bobcats in rebounds with 8 and added a team leading 4 steals to go with his 2 points as the Bobcats overcame a two-point half time deficit to win 63-50 over Jasper. Top scorers for Orangefield were 19 from Ragusa, Scales with 17, and Zane Wrinkle adding 13 points. The win put the Bobcats into the championship game.

Vidor reached the title game with a dazzling display of outside shooting. The Pirates won their first four games averaging over 72 points per game using the great long-range marksmanship of Bryce Loftin and Zander Lindsey.

The Pirates came out of the gate on fire jumping to a 6-0 lead on two baskets by Brayden Root and one by Lindsey. Wrinkle got the Bobcats on the board with a bucket before Ragusa reeled off the next 8 points in the game to put Orangefield on top 10-6.

Wrinkle added two more field goals that gave Orangefield a 14-11 advantage as the quarter was ending. The Pirates' Jose Guerrero-Evans put up a three-pointer that wrinkled the twine and tied the game after one period.

A fee throw by Dischler, his only point of the game, broke the tie at the start of the second quarter giving the Bobcats a lead they would never relinquish. The second quarter proved sweet to Pete as Ragusa poured in 9 points helping Orangefield pull ahead 31-23 at the half.

The third quarter saw Vidor narrow the lead to seven points 47-40 with Loftin pumping in 7 points and Root tacking on five for the Pirates. Ragusa had 7 more points and two assists for the Bobcats.

Orangefield actually opened up a double digit lead about midway through the final quarter 53-42 on a spectacular scoring play by Ragusa. The Pirates staged a comeback on the free throw shooting of Loftin and three-pointers by Lindsey and Guerrero-Evans that cut the lead to two 56-54 with a little over a minute to play in regulation.

The advantage was stretched to three on a free throw by Parker of the Bobcats. Ragusa closed with another beautiful basket and then two clutch free throws which the Pirates could only answer with a lone field goal to bring the final score to 61-56 for Orangefield.

Ragusa had his highest scoring game of the tournament finishing with 30 points. Wrinkle and Parker both were in double figures with 14 and 10 points respectfully. Loftin led the Pirates with 18 points hitting on 10 of 12 free throws. Lindsey scored 15 points for Vidor.

Orangefield Coach Jake McDonald was happy with winning the tournament and the efforts by provided his Bobcats. "We were shorthanded today. Everybody stepped up and elevated their roles, and I thought they all did a great job to contribute to the win today," McDonald applauded.

The Bobcats could not rest on their laurels too long as the district schedule started on Tuesday against the Buna Cougars. McDonald commented, "We wanted to go into that game with some momentum, and I obviously think winning five games in three days will setup us for some success."

The Bridge City Cardinals played well in the Orangefield Tournament reaching the third place game. The Cardinals lost their opening game on Thursday 67-58 to the Woodville Eagles. Walker Britten dropped in five three-point baskets to finish the game with 34 points. Bryce Linder and Aaden Bush both scored 8 points.

The Cardinals played their best game of the tournament on Friday against the Onalaska Wildcats which had upset Jasper in their second game on Thursday. Balanced scoring saw Britten, Lincoln Breaux, and Aiden Gutierrez each score 17 points as Bridge City won 64-54 opening the door for the Cardinals to play in the championship game if they could win their next game on Saturday morning.

Bridge City faced the Vidor Pirates with the winner advancing to the final game. The Cardinals got two threes and eight points from Britten to grab a 12-9 lead but a half court shot by the Pirates at the buzzer tied the game after the first quarter.

Vidor would hit fourteen threes in the game and made all six free throws. The Pirates cruised to a 72-46 triumph to earn their way to the final game against Orangefield.

In the third place game Bridge City played against Jasper. Linder was a monster inside for the Cardinals. Bryce scored 26 points and pulled down numerous rebounds against a bigger Jasper center.

The Bulldogs had an eight-point lead after three quarters but the Cardinals fought back with Gutierrez nailing a trio of threes in the fourth quarter to cut the lead to three. A last second three-point shot by Jagger Carlin just missed which allowed Jasper to escape with a 59-56 win and third place in the tournament.