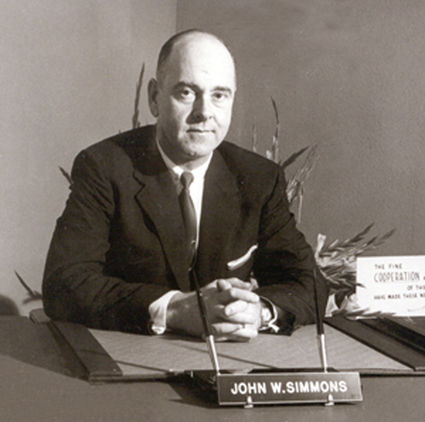 My office neighbor Corky Harmon suggested I look up some info about John W. Simmons.

Folks up at the Sabine River Authority know him as one of SRA’s original pioneers. And most people don’t know, Harmon told me, “ ... that the guy who started the whole thing was from Orange.”

The John W. Simmons Gulf Coast Canal System was named in honor of the Orange native, first president of the Authority’s board and later the agency’s general manager.

The Authority was created by the state Legislature in 1949 as an official agency to control, store, preserve and distribute the waters of the Sabine River and its tributaries for useful purposes. The Authority’s watershed area includes all or parts of 21 counties.  According to information provided by the Authority’s Ann Galassi, Simmons was born Jan. 17, 1911. He graduated from Orange High School in 1927.

He received a chemical engineering degree from Texas A&M and went to work for Texaco in Port Arthur. Simmons served as a chemical officer in the Army Air Corps throughout World War II.

He returned to Texaco in 1946 and, as the new executive director of the Orange Industrial Development Committee worked to attract several industries to Chemical Row.

As SRA director, Simmons helped authorize the purchase of the Orange County Water Co. from Mr. and Mrs. H.J. Lutcher Stark and Mr. and Mrs. E.R. Odom in March, 1954.

The newly-acquired canal and pump system provided the initial catalyst for success of the Authority.

In 1956, Simmons became the Authority’s first full-time executive vice president and general manager and served until he retired in 1978.

He is credited with being instrumental in the development of the Lake Tawakoni, Toledo Bend and Lake Fork reservoir projects. According to http://www.ToledoBend.com, some 1,000 including Texas Gov. Preston Smith, Louisiana Gov. John McKeithen and Orange County notables Calvin Watts and Charlie Wickersham gathered Oct. 11, 1969, at Toledo Bend, to witness the official dedication of the dam and hydroelectric power reservoir.

According to the site, “The project was blessed by holy water from the great bend in the Tajo River in Toledo, Spain. The Archbishop of Toledo blessed the water sent to Toledo Bend especially for the occasion. Fort Polk’s Army Band provided music for the ceremonies.”

Dignitaries unveiled a plaque, turned on the turbines and expressed pride in the occasion.

Also attending was John W. Simmons, of Orange, who watched as Gov. Smith threw the switch to start the giant powerhouse. And although I could find no written account of it, I know he was smiling. [robert1961@live.com]