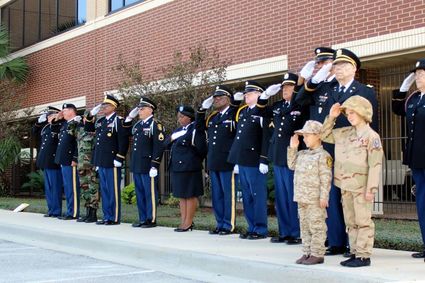 Texas Military Honors Team Fund-raiser event 6 p.m. to 8:30 p.m. on Thursday, Feb. 27 at St. Anthony Cathedral Basilica, 700 Jefferson St. in Beaumont. The cost is $50 per person and $35 for veterans. To sponsor a veteran’s seat, notify a member of the committe. Purchases for tables are also available for businesses or large groups. The evening will consist of a variety of local restaurants hosting a dinner and silent auction will take place during the event and entertainment. Joe Tortorice Jr., president and CEO of Jason’s Deli will be the guest speaker. He was also a member of the United States Air Force.

The purpose of the organization is to provide, free of charge, each military veteran who has served the country honorably with military honors when he or she dies, according to information provided by the organization.

Members volunteer their time and effort to see each veteran receives honors for their service when a request is made to the funeral home.

A color guard is also provided for special events and the members talk to school students on the importance of honoring the flag and veterans.

Members and the board do not receive compensation- they do this out of love for their country and to the service of the men and women who gave so much to keep the country free.

Pamela Vincent, owner of Luv Lingerie and Boutique in Bridge City, is a member of the women’s auxiliary and one of the organizers of the event. She said the 12 women in the auxiliary began planning the fund-raiser two months ago.

“We were told (by the board) to go for it and 12 women ran with it. It’s been phenomenal. We were going to schedule it at the end of March, but we moved it up because of the (primary) elections,” Vincent said.

Since then, four others have joined the organization. The funding from the event goes to uniform a man from head to toe. Uniforms can cost up to $660. The Texas Military Honors Team also began a couple of new programs. The organization will give military veterans who didn’t have a military funeral one including grave side services, guns salutes and Taps played.

Another program is adopting a local veteran rather than solely sending money only to national veterans groups. Vincent said one of their goals is to get members to join the organization, particularly younger members.

“It takes seven men to do a service. We want the group large enough in the event of splitting up for two families funerals. We have a lot of senior members. We need younger members to keep it vibrant,” she said.

RSVP by February 21 by contacting one of the names below. Seating is limited. Help the Texas Military Honor Team honor our heroes.

Those who can’t attend the fund-raiser can still make a donation by purchasing a ticket for a veteran for $35.

“We want to make the public aware there is an organization available to do this. The men doing this are doing it from their hearts. It takes dedication to make sure the families are taken care of,” Vincent said. For more info or for assistance to a veteran, call Pamela Vincent at 409- 549-1210, or go to http://www.facebook.com/texasmilitaryhonorsteam.