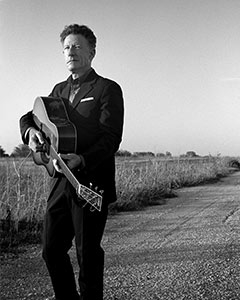 Singer, composer and actor Lyle Lovett and his Large Band will make a stop at the Lutcher Theater for the Performing Arts in Orange, Sept. 9, at 7:30 pm. Tickets will range from $30-$70, and are available now at the Lutcher box office.

Coupled with his gift for storytelling, the Texas-based musician fuses elements of country, swing, jazz, folk, gospel and blues in a convention-defying manner that breaks down barriers.

A singer, composer and actor, Lyle Lovett has broadened the definition of American music in a career that spans 14 albums. Coupled with his gift for storytelling, the Texas-based musician fuses elements of country, swing, jazz, folk, gospel and blues in a convention-defying manner that breaks down barriers. Lovett has appeared in 13 feature films, and on stage and television. Among his many accolades, besides the four Grammy Awards, he was given the Americana Music Association’s inaugural Trailblazer Award, and was recently named the Texas State Musician.

Garden & Gun recently called Lovett “one of America’s most beloved singer/songwriters,” and he was featured in the coveted “What I’ve Learned” column in the February 2012 issue of Esquire.

Lovett has been touring in support of Release Me since its release in February, 2012. The album was #1 for several weeks on the Americana charts. Produced by Nathaniel Kunkel and Lovett, Release Me represents the end of an era as it was his last record for Curb/Universal Music Group after being on the label for his entire career. Release Me is quintessential Lyle, mixing a smart collection of originals and songs written by some of his favorite songwriters that show not only the breadth of this Texas legend’s deep talents, but also the diversity of his influences, making him one of the most infectious and fascinating musicians in popular music.

Since his self-titled debut in 1986, Lyle Lovett has evolved into one of music’s most vibrant and iconic performers. His oeuvre, rich and eclectic, is one of the most beloved of any living artist working today.

Tickets for the show may be purchased at the box office, or by visiting http://www.lutcher.org.