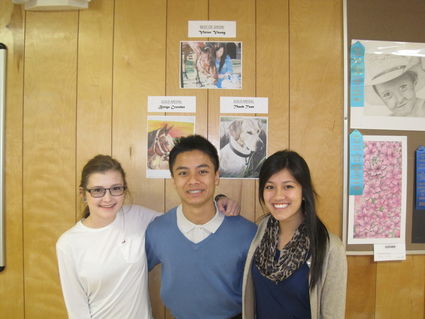 The Orangefield High School Art Department's students were judged last weekend by the Houston Livestock Show and Rodeo judging committee. The students scored exceptionally well in the contest, which has over 200 school districts in participation.

Best of Show was senior, Victor Vuong, for his painting, "Always There." Thanh Tsan, senior, was a Gold Medal winner for her Prismacolor drawing entitled, "Dreek's First Hunt." Bettye Crochet, sophomore, was also a Gold Medal winner for her mixed media work titled, "Out to Pasture." In addition, Bre Norton, Sarah Perry, Alyssa Kelley, and Morghan Isaacs were named as Finalists. Numerous blue and red ribbons were awarded, as well as several white ribbons. Twenty-two seniors received scholarship applications in the competition.

The top three winners moved on to Houston where they will be on display throughout the course of the rodeo. The remainder of the winners are on display in the halls of Orangefield High School. Ms. Sherry Windham is the art teacher in charge of the contest for the school district.